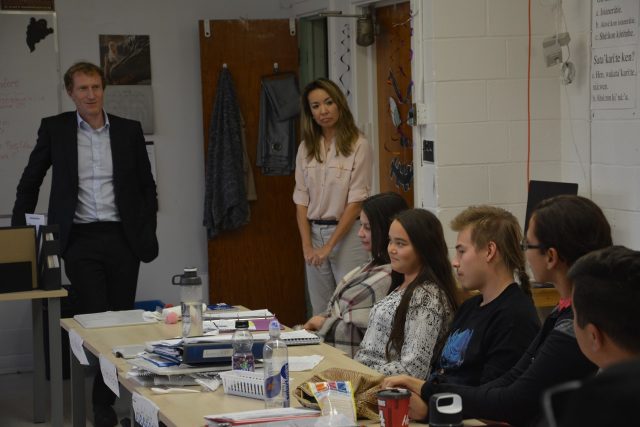 Liberal MP Marc Miller was a guest on K103.7 Radio’s Tewawennakará:tats Talk Show in October, before dropping by the KOR to meet with students in the Kanien’kéha immersion program, a language he is learning online through Six Nations. (Daniel J. Rowe, The Eastern Door)

The Tewawennakará:tats Talk Show had an unlikely but enthusiastic guest October 24, when Liberal MP Marc Miller joined hosts Konwanénhon Marion Delaronde and Karihwiiostha Callie Montour for around 20 minutes, all in Kanien’kéha.

“I’m exhausted,” Miller told The Eastern Door after the show, as he toured the Kanien’kehá:ka Onkwawén:na Raotitióhkwa Language and Cultural Center and met with students in the Kanien’kehá:ka Ratiwennahní:rats Adult Immersion Program.

“To have him as a guest on our show went well,” said Delaronde. “He is raising awareness of the difficulties we have in revitalizing a language which is considerably different from the dominant surrounding two languages. His efforts to learn Kanien’kéha are coming with gained sensitivity to some of the resource issues we’ve been facing.”

Miller has visited Kahnawake in the past, meeting with Mohawk Council grand chief Joe Norton along with Heritage minister Melanie Joly, but found speaking for 20 minutes on the radio in Kanien’kéha a touch tougher, though very enjoyable.

“It was intense but I think you’ll hear tonight that I did my best,” said Miller.

In addition, he spoke with those developing the curriculum for the immersion program at the KOR.

“It’s fun to see this centre,” said Miller. “I know the federal government has given more funding, but a lot of this is built on people, and it’s cool to meet the people and see what they’re learning and their journeys.

“Everyone has a different story, so it’s really, really cool, and watching what’s being done for the curriculum is inspiring because it’s all in a way self-made, and pieced together in such an amazing, intellectually challenging way.”

Miller visited the Walking With Our Sisters exhibit in the summer, and KOR’s Lisa Phillips has always been impressed with his willingness to engage with the community’s programs.

“Everyone was impressed both with his interest in Onkwehonwehnéha as well as his grasp of the language,” she said. “He spoke well, introducing himself and was able to understand questions (in Kanien’kéha), and answer in the language. Very impressive.”

Miller is a promoter of Kanien’kéha, highlighted by his just under two-minute speech entirely in the language presented in parliament in the spring, urging a greater effort to promote and preserve Onkwehón:we languages.

He spoke about getting out of Ottawa, and seeing what’s being done in person, so he can take that back to parliament with him.

“You don’t normally get to see that from where I am on the ground, so this was a really good opportunity for me,” said Miller.