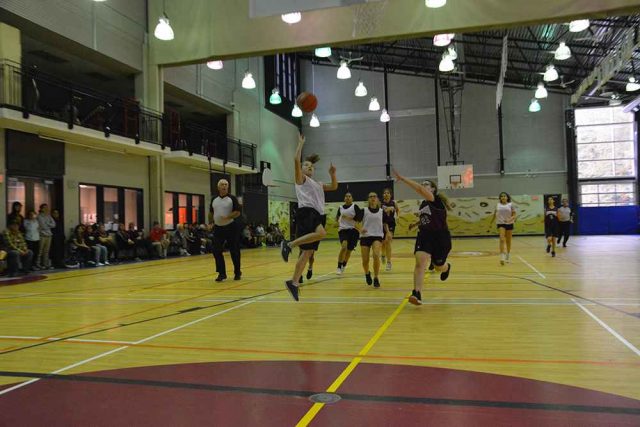 Jordyn Goodleaf was among KSS’s killer second line that ran the score up so high that scorekeepers turned the board off, and the two teams played scrimmage style. (Daniel J. Rowe, The Eastern Door)

The school hasn’t had a team in over a decade? Fine.

They have had only one practice? Fine.

Okay, that last one was a lie, but Kahnawake Survival School’s Midget girls’ basketball team put a stamp down as “one to watch” Friday, as it put on a two-sided showcase against Westwood High School with a dominating win in the Muskies’ first tour of the hard court in over a decade.

In the end, refs and coaches decided the best course would be to turn the scoreline to zeroes after Survival was a quarter from blowing out Westwood High School by over 50 points.

At 57-4, it seemed unlikely that Westwood would mount a comeback, so the girls played out the game in classy style, taking the first win of the season.

Why were the girls so good?

“We have a great coach,” answered guard Jordyn Goodleaf. “I didn’t think I would play that well because I haven’t played in two years.”

Goodleaf is among the dozen or so multi-sport female athletes at Survival that looked as natural on the hard court as they do on the soccer pitch, wrestling mat, volleyball court or lacrosse box

“That was natural skill,” said Teiotsatonteh Diabo, who won a gold medal on the EDN’s women’s lacrosse team at the NAIG this summer. “We only had one actual practice and about three try-outs.”

Diabo knew her team would perform well, but how well the team played was beyond the expectation of pretty much the whole team.

“We were actually very surprised,” she said. “We all did so amazing with our shots and our layups.”

For those looking for cherries on the top of ice creams, Shaynah Delisle obliged and jacked a three-ball in the second half that may or may not have been what shorted out the scoreboard.

KSS’s Midget girls’ next game is at the very same Westwood School November 13.

Now it’s up to the KSS boys to match the girls, as they take the court today at home against Kuper Academy.

Kuper’s Midget team has yet to play, but also includes a handful of talented up-and-comers.