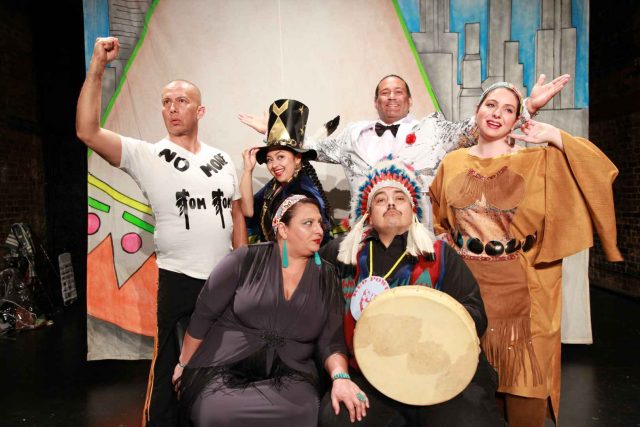 Those in the mood for a slice of theatre, satire and straight up comedy might want to take a road trip to La MaMa’s Downstairs Theatre in Manhattan and check out a play that opens Thursday.

Don’t Feed the Indians: a Divine Comedy Pageant is the title of the Safe Harbors Indigenous Collective’s new production and if the title didn’t rope you in, perhaps the play’s description will.

“Come one, come all to the greatest sideshow of Indigenous people you’ll ever see! We’ve got everyone’s favourite clichés from the stoic Indian to the wise Indian guide, from lounge singers to fortune tellers, all the bare-chested, broad shouldered, feather wearing Indians you could want… but this time with a twist,” the promo on the show’s webpage describes.

Actor Danielle Soames plays Birdwoman, Pocahontas, Julie Fink and Mish Mosh and has been part of creating the roles for the past five years.

“The process has been one of dialogue, friendship and emotions consisting of the political stance of what is right and wrong as an Indian in the modern world,” she said. “More of what wrongs have occurred and how do we navigate without feeling invisible as an actor telling our story.”

Soames is a Kanien’kehá:ka/Jewish girl born in Atlanta, “the southern states who celebrate Christianity,” as she explains it. Her mother is Wilhelmina Montour, who married the late Jackie Kleiner from the Bronx. Her grandfather was Martin Montour and grandmother Mary Stacey.

Being raised in two marginalized cultures was something Soames drew on while developing the play.

“Being able to use my knowledge through the exploration of creating characters has been somewhat therapeutic,” said Soames, who married Brandon Gray from New Jersey, who is an Agnostic Irish Catholic; not a bad mix for a creative soul developing a sardonic satire.

Working through the play was “kind of perfect with my background,” according to Soames.

Soames said the cast has thoroughly enjoyed exploring stereotypes and calling out their ridiculousness of them while on stage. The play originally was a table read that became a discussion and then presentation in front of the United Nations Permanent Forum on Indigenous Leaders.

Soames is excited to finally perform the play live off-Broadway.

“I am more excited than nervous,” she said. “I guess what makes me most nervous is how the audience will react. What will they understand or “get” and will this impact them or leave an impression, which executes change… I can only hope that non-Indians will laugh or feel they have permission to laugh because we are also laughing.”

The play opens Thursday and runs at La MaMa’s Downstairs theatre at 66 East 4th Street to November 19 from Thursday to Saturday at 7 p.m., with matinees Sunday at 2 p.m.

“If anyone is curious on how folks of various Native backgrounds get along and create a family onstage, then come see Don’t Feed the Indians,” said Soames.