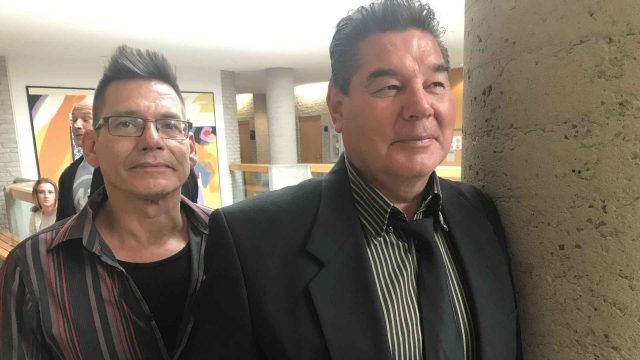 “We lost the battle, but we didn’t lose the war,” said Roberto De Minico, lawyer for Floyd Lahache, former owner of the First Nations Winery.

De Minico was speaking outside a Longueuil courtroom Tuesday after Justice Stephane Godri quashed De Minico’s motion to exclude wiretap evidence in the fraud case against Lahache and nine others in Project Malbec, a case that resulted in a dozen fraud charges in 2015 for alleged tax evasion related to sale and resale of wine from Lahache’s winery on Highway 138 in Kahnawake.

De Minico argued in June that the credibility of SQ officer Stephane Allaire was questionable when he applied for the wiretap, and that he misled the authorizing judge, who granted the tap.

Allaire, De Minico vehemently argued, used stereotypical language in the application that should never find its way into a police investigation.

In addition, the defence sought to prove that a wiretap was not necessary and that other investigative measures should have been taken.

Godri read his judgement Tuesday and said, “the affiant did not try to mislead the authorizing judge and has no reason to conclude that he did not attempt to give a full and frank disclosure.”

Godri added Allaire could have taken a greater attention to detail in some paragraphs in the application, but he did not intend to mislead the judge who authorized the wiretap.
The Eastern Door reported in June about the questionable and potentially stereotypical language used by Allaire in his application, writing that the “geographic, political and cultural situation in the community was very sensitive,” thus requiring phone taps.

Godri mentioned these lines saying it was regrettable this language found its way into the documents, and that there was “no information to back this up.”

However, the investigative necessity of a wiretap, Godri ruled, relates to the investigation as a whole, and that even without the questionable paragraphs, the authorizing judge was within his rights to grant permission to tap phones of the accused.

With the wiretaps in, the trial will go forward.

There is a pro forma hearing Thursday where some negotiated deals and guilty pleas are expected, as well as trial dates fixed for others in the case.

Reaction to the decision was, predictably, mixed.

“We’re pleased,” said crown attorney Philippe Vallieres-Roland, who will leave the case and not argue at trial. “It sounds like a very reasonable decision. We’re glad that the judge took time to analyze both sides. We know the comment on the stereotype is something we’re going to have to learn from, obviously, but we are also happy that he considered the fact that to prove conspiracy charges, a wiretap is often necessary.”

“I want to be able to read it and analyse it before I comment on the decision,” said De Minico. “There is no doubt that we are disappointed in the decision.”

The defence cannot appeal the decision, but could, if found guilty at trial, appeal the entire case.

Vallieres-Roland is also involved in the Project Machine case that charged Rice brothers Peter Francis and Burton and their father Peter Boy with fraud. He explained how both cases, and many other conspiracy files, relied on wiretap evidence to bring charges to the multiple accused players.

Project Malbec alleges that the accused defrauded the various governments of around $14 million in taxes between 2010 and 2014.

Finding in favour of the defence may have had a huge impact on conspiracy investigations, Vallieres-Roland said.

“Especially investigations on the reserve or more widely, conspiracy charges are something that the bureau de la grande criminalite does as a matter of course,” said Vallieres-Roland. “To grant this motion would have a really big impact on the way the police conduct their investigation, so it’s a really big decision for us.”

Lahache is undeterred and remained positive after the verdict.

He remained adamant that a wiretap was not necessary, and that other avenues of investigation could have been used.

Knowing his private phone calls were monitored is something that bothers Lahache, who remains adamant that he is innocent of all charges.

“To me, I didn’t do anything wrong,” he said. “I was doing my business as usual.”