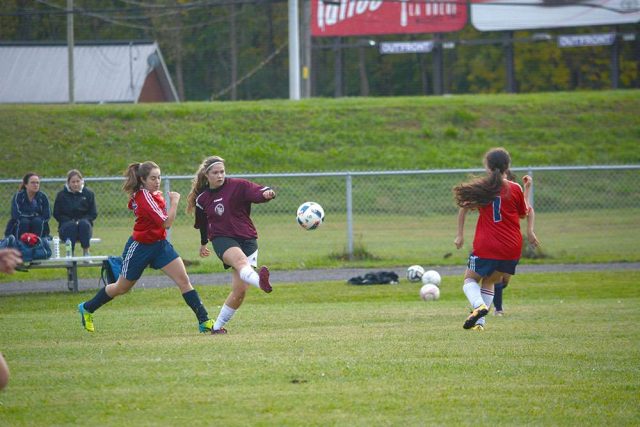 Iakaonhawinon Mayo said her Muskies continue to improve and are looking good going into the playoffs that start today. (Daniel J. Rowe, The Eastern Door)

The Greater Montreal Athletics Association’s (GMAA) schools will have their first chance to bring home team sport banners starting this week. Kahnawake’s athletes have a quality shot at bringing home championship medals on multiple levels in both soccer and softball.

Survival ended the season with a quality 4-3 win over Beurling Academy at home, after beating Lakeside Academy 5-3 Wednesday.

Survival’s girls are now ready to start the playoffs that begin Tuesday for the Juvenile girls in the third division.

KSS placed second overall, and have a bye for the first round, and play Thursday at home.

Kuper Academy also has a Juvenile Girls Div. 3 team that played Macdonald High School Tuesday, and lost 1-0. The loss puts Kuper out of the playoffs.

Survival midfield playmaker Kenzie Kane was pumped after finishing the season so strong, and thinks her team can make a push in the playoffs next week.

“I’m so excited and happy we made it this far,” said Kane. “We came a long way. None of the girls on the team give up. We just show up to push hard and try to win.”

Iakaonhawinon Mayo said part of the team’s success is based on the girls improving with each game.

“We’re all getting better after every game and I think we’re going into the playoffs pretty well,” she said. Keeper and forward Cora Diabo scored Survival’s second goal last Friday, and knows that, in the playoffs, when opportunities arise, the Muskies need to be relentless, and continue to communicate and be positive on the field.

“We all need to work on trusting other players and to take our time with the ball,” said Diabo. “Sometimes we have an opportunity to make a good play, but we rush and just kick it anywhere. We’re still a new team, so I find we have to avoid getting mad at each other if another makes a mistake.”

Kuper’s Bantam girls finally lost a game this year when they dropped a 2-0 shutout to West Island College last week.

Survival’s Cora Diabo is one of the many girls from town ready to fight for a banner in the playoffs.

“I feel very pumped for us to head to the playoffs,” she said. “We worked real hard in games, and we are all real committed to the team, so I’m really excited.”

Billings set for another softball banner

If Howard S. Billings does not walk off the softball diamond with a GMAA championship banner Thursday, it will be due to a huge upset.

The Blazers play Beaconsfield High School Tuesday in the semi-finals after a perfect regular season with only two teams able to score more than a run on the Chateauguay side.

“The game we played yesterday was the only challenge,” said double-letter softballer Kallie Goodleaf, who plays for Billings.

Billings did have a tough first game against St. Thomas High School that Goodleaf did not play in, where the Knights lost by a single run.

Since then it’s been clear sailing for the blue and yellow team that has multiple softball banners hanging in its gym.

Goodleaf plays alongside fellow double-letter softballer from Kahnawake Sarah Jacobs. Goodleaf spoke about the adjusting to GMAA ball after playing in the elite league for the Chateauguay Dragons.

“It’s very different,” she said. “There are a lot of different rules from AA softball. Different type of pitching, (and) you can’t steal (or) touch home plate.”

Tuesday’s game starts at 3:30 p.m. at Bonneau Park in Chateauguay with the final Thursday at the higher seed’s home diamond. Billings is the top seed, so, barring a huge upset, will host either St. Thomas or John Rennie.