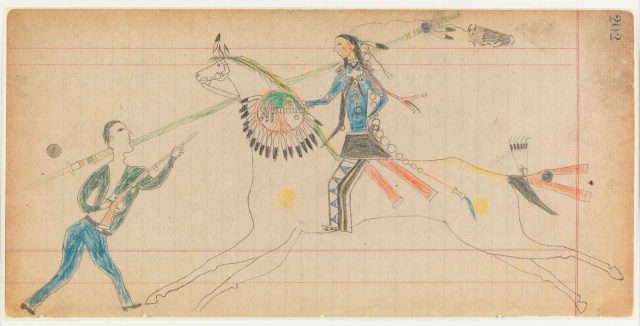 In story and history, the images recall one genre: the Western.

The Montreal Museum of Fine Arts’ current major exhibition is “Once Upon a Time… The Western,” and it is, quite simply, a must-see show.

The show opened late last week and takes visitors on a tour of western history, fantasy, film, tragedy and hope – all in one stroll.

The exhibit is not a celebration of western movies, but rather recasts the Western in an engaging and clever way.

Unlike actual movies, however, this exhibit does not enforce stereotypes or fictitious accounts the genre is guilty of promoting, but rather examines where those stereotypes come from and why they are, at worst, problematic.

“It was very important to me that it not be another show on the myth of the west, and that people came away from this exhibition having a different understanding of the western than what they entered with,” said Mary-Dailey Desmarais, curator of international modern art at the MMFA, and co-curator of the exhibit.

Stunning landscape paintings and portraits hang alongside authentic artifacts, screens showing western films and examinations of where the stories went astray in depicting life on the plains.

When walking through the rooms made to mimic a film production (set, character, theme, etc.), viewers can see how the place “the west” becomes a construct in people’s imagination, and the reality behind the screen and page.

“What we tried to do, and I hope we’re successful at, is not just to show all of the stereotypes that accompanied the development of the western, but also the realities behind it,” said Desmarais.

“It’s difficult to be showing this kind of art, but also hammering home or really emphasizing that, particularly when it comes to the representing of Indigenous Peoples, so much of what was being portrayed or popular at the time was false.”

“We wanted, always, the real lives at stake in the development of the Western to be very present,” said Desmarais.

The MMFA has a number of upcoming shows featuring Onkwehón:we artists including Nadia Myre’s Scattered Remains, which will be part of the museum’s Artist. Woman. Indigenous. series.

Desmarais said this attention to Onkwehón:we work is intentional, and the MMFA, like many museums across the continent, is actively engaged in promoting Indigenous work and themes.

“It’s come to the attention of museums across North America that there’s been a significant hole in collecting that for a long time Indigenous artists had not been paid attention to in the way of non-Indigenous artists, and certainly, it is the mission of this museum to be inclusive to everyone and all different kinds of artists, not to mention the fact that the work that the Indigenous community in Canada is producing is very strong,” said Desmarais.

“We were very excited to have the opportunity to include very outstanding works.”

The museum is also running a series of film screenings, lectures and tours of the western exhibition.