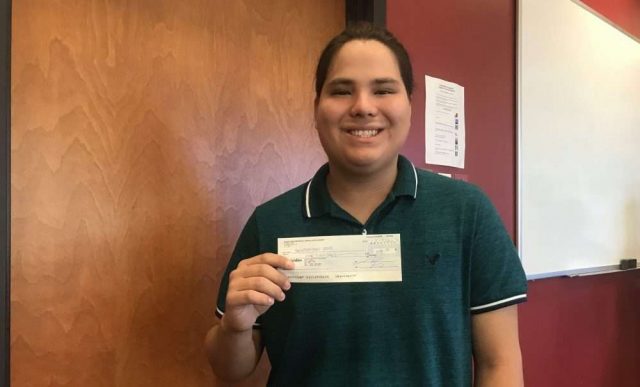 Second-year cinema student Tehosterihens Deer is the latest recipient of the Jesse Deer Memorial Media Scholarship, which commemorates the life of the well-known and loved media personality in Kahnawake.

“It really means a lot to me. I was shocked,” said Tehosterihens. “It’s an honour. I would like to use this cheque to help continue my education in CEGEP and hopefully in the future, university.”

The 19-year-old is expected to graduate from the Cinema-Communications program at Dawson College next fall.

“I had an interest in writing, filming- mainly writing because I’ve written a few stories and scripting. Right now, I’m getting a little familiar with the camera,” said Tehosterihens.

Outside of group projects for school, he’s been working on his own short film – a sequel to a fictional story based on the Oka Crisis that his friend produced.

“I watched it, and said hey, have you ever thought about doing a sequel? He said ‘yeah,’ so over the course of the summer, we wrote about a 40-page script. We met two to three times a week, we have a pretty solid script,” said Tehosterihens.

He was presented the $1,000 scholarship on Friday morning at Tewatohnhi’saktha’s conference room, with the presence of his and Jesse’s families.

“It means so much because he’s been gone for eight years now. To have this gathering each year in memory of him, it keeps him alive. Doing this, I am humbly grateful for it all,” said Jesse’s mother Susie Curotte.

Jesse made a profound impact on the local media landscape and was beginning a promising career when he passed away November 24 at the age of 23 from complications of H1N1 virus in 2009, mere days before his 24th birthday.

He worked as a columnist in The Eastern Door and DJ on K103 Radio, as well as a television reporter for both Mohawk TV and KTV.

“He was a personal friend of mine, and he also wrote for us. I found that his candour and his honesty with his struggles in life, whether it be with his weight or with some of the issues he had in the community, he was very open about it and he actually impacted the lives of other people in the community.”

The award is also meant to use Jesse’s life experience as a way to get people into the media industry in the community.

“We always look for people who embody what Jesse brought to Kahnawake, which was community spirit, of course a love for the media, and he was known all over the community and beyond,” said Bonspiel.

“It’s young men like this, young women, young community members who are the future of Kahnawake, who we look to pass that torch to. For the longest time, we looked at Jesse in that way, and then he was taken from us.”

Bonspiel said the committee is looking to raise more money for the scholarship, which has enough funds for two more scholarship recipients. A GoFundMe campaign was launched in May where donations can be made.

“We want to keep Jesse’s name and legacy alive,” he said.