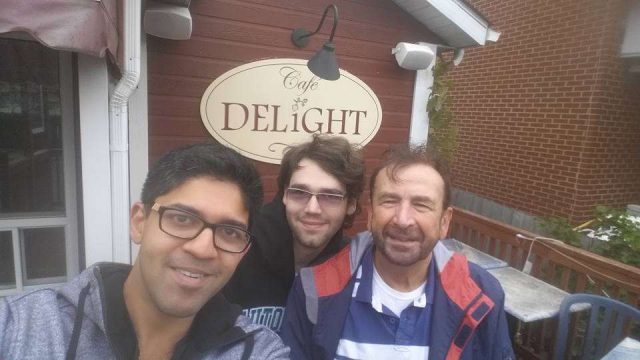 Jackson Eidelberg visited “Caughnawaga” as a child with his holocaust survivor parents, and came back after being reintroduced to the community through APTN’s Mohawk
Girls. (Courtesy Jackson Eidelberg)

Mohawk Girls season five premieres November 14, and there is one fan who will be very upset to see it run its course.

Jackson Eidelberg, 60, lives in Toronto and got hooked on the show.

“As a lark, I past it once as I was looking at the guide, so I tried the show,” he said. “First of all, I like the acting, I like the show; that was my initial reaction.”

Eidelberg grew up in Montreal before leaving with his parents for Toronto during the great Anglophone exodus of the 1960s and 70s.

“I had remembered Caughnawaga, which was its old name,” said Eidelberg. “Shockingly, as a young child, I remember my parents in Montreal taking me to Caughnawaga and just going for a drive and to tour the town. It was a different world then. I almost feel embarrassed at what was done.”

He remembers vendors selling belts, moccasins, and other souvenirs as a child, and in watching local writer/director Tracey Deer’s show about four girls finding their way in life and love in Kahnawake, he saw a version of the modern community.

The show opened his eyes to issues in the community in an easy and charming style.

“I kept watching the show more and more, found it very funny,” said Eidelberg. “Four young ladies trying to find their way in life, but also navigating very stringent rules, family expectations, laws of the reserve, blood lines or blood background. I just found that within the context of the humour, there were some very serious issues there.”

Fast-forward to last weekend and Eidelberg decided to stay in the community while on vacation for the long weekend.

“I saw very nice homes, I stayed in a lovely house, and the world has so changed, and so much so for this First Nations reserve,” said Eidelberg. “I don’t know if the inner workings have changed that much, but visually it has to me.”

Eidelberg connected with Deer on the phone, who was blown away to hear that someone had taken to her project in such a positive way.

“It’s everything we aimed to do with this show,” said Deer. “This notion of building bridges, it’s this big concept that we seek to do and then here’s this guy that called and was so impacted by the show that he had to come back and experience it himself, and it changed the way he thinks about things. It’s just a perfect story to hear with the show coming to an end. It’s very satisfying.”

Brittany LeBorgne, who plays Zoe in the show, agreed.

“It’s powerful to know that we can have an effect, but when a non-Indigenous person can relate, and be curious to the point where they want to come meet us, to Kahnawake, in person, and want to know more about who we are, and just to have them care, is really something,” said LeBorgne. “If we can open their eyes on some of our issues, and to give them context about why we are who we are, then it’s worth it even more. It goes just beyond entertaining people.”

Eidelberg walked the Old Malone Highway, did some sightseeing and was impressed by how much the community has grown since he was a child.

“It was as if I had to do this based on my early recognition of how the First Nations were treated just 40-50 years ago,” he said. “It’s not that long ago, and, maybe I’m naïve, but looking at these houses and how much better things seem to be.”

Eidelberg does not feel his parents had bad intentions taking him to Caughnawaga when he was a child, but has a hard time with the intent of his immigrant parents, who survived the holocaust and fled Europe after the Second World War.

“It was almost a cultural training,” he said. “They took the children to go ‘look at the Indians.’ I’m shuddering at that.”

Eidelberg is thankful Deer’s show updated his impression of Kahnawake, and that he took the opportunity to see the community first hand.

“It’s something I had to do and I feel very good having done it,” said Eidelberg. “The show shows a lot of happiness among other things and that the people are just living their lives.”