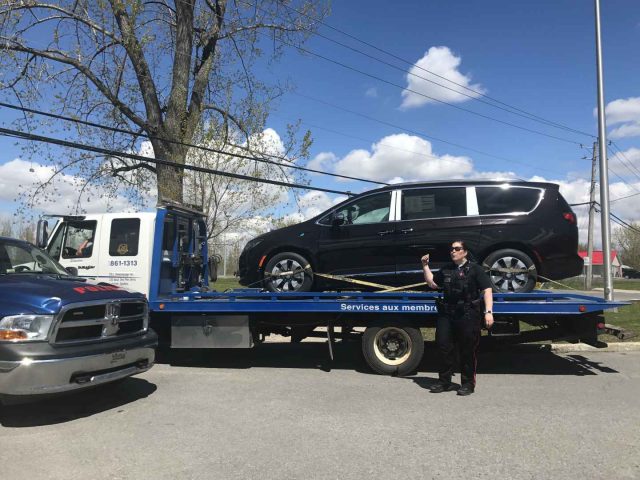 On top of their usual duties investigating and preventing crime, as well as ensuring the steady flow of traffic through the community, the Kahnawake Peacekeepers have something relatively new to deal with; the delivery of cars to the community for the purpose of avoiding governmental taxes for the purchaser. It’s an issue that readers of this paper see almost weekly in our Police Blotter section.

The increase in deliveries to the territory has been precipitous since the so-called Mikinaks from nearby Beauharnois began buying their way onto what they were led to believe was the Indian Registy, and with it, tax exempt status.

Assistant Peacekeeper chief Jody Diabo said there has been a great deal of confusion with who is allowed to have goods delivered on territory tax-free.

“A lot of people assume they are Mikinak cards because they’re not from Kahnawake,” Diabo said “But if you have a status cards then it is okay. A lot of people who have cars delivered to the police station are from Montreal, Chateauguay and LaSalle.”

There are nearly daily reports on social media in Kahnawake of cars surepticiously being delivered on the territory, with the purchaser and seller making lightning quick exchanges.

It has led to a significant increase in calls to the Peacekeepers.

“People call us assuming a delivery must have been to a Mikinak,” Diabo said. “But it could have been legitimate.”

One such case occured in July, to the ammusement of the purchaser but not so much for the seller.

Jimmy Patton ordered a new Lexus, for his wife Claire, to be delivered to the parking lot of the Caughnawaga Golf Club.

Felix Lee, the salesman from the Spinelli Lexus Pointe Claire dealership, followed the flatbed delivering the car. They crossed the Mercier Bridge, turned south on Highway 207 and pulled in to the parking lot just before lunch. Moments after they got there, the flatbed was surrounded by two Peacekeeper cars who raced in with their lights flashing.

“I was shaking. I was terrified,” Lee said. “I had no idea what was going on.”

Jimmy had just walked out of the pro shop and witnessed the scene.

“I saw the salesmen look like he was in shock,” Patton said. “It was kind of funny.”

Jimmy went to the house and drove his wife Claire in a golf cart to get her new car. When they came around the clubhouse, she saw the commotion.

“My poor salesmen was terrified and felt like he was being interrogated,” Claire said. “And of course he was asked for the contract.”

Jimmy managed to joke with Lee about the whole ordeal.

“I told him there’s a bunch of loony tunes down the road there who call themselves Mikinaks,” Jimmy said as way of explanation.

After speaking with the Peacekeepers and providing all the proper documentation, the car was released to Jimmy and Claire.

“They (the Peacekeepers) told me that they had four calls from the exit of the bridge to the golf club,” Claire said. “They said it’s a Mikinak alert. All in half a mile. They told me they get six to 10 calls a week about this.”

Despite the somewhat humorous mix-up on this legitiate delivery, the Peacekeepers are being proactive on the issue.

“I have a couple of dealerships that contacted me and I sent them the email with good Indian staus cards,” Diabo said.

She said they have been in contact with many of the dealerships in the area about proper procedure.

“It’s easier when we verify it right here at the Peacekeeper station,” Diabo said. “It’s such a big thing with a Mikinak delivery because anytime they (community members) see it, boom, they think it’s a Mikinak car right away.”

Diabo says the simpliest way is to arrange to have the sale completed at the Peacekeeper station and to walk inside with the proper identification.