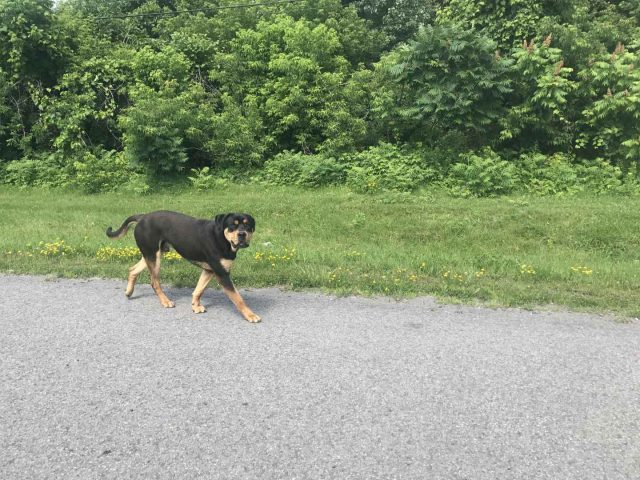 A month after a 13-year-old was attacked by a large lab mix and pit bull, community members are calling on Kahnawake’s animal control law to have stronger teeth when it comes to dealing with loose dogs.

“Their right to own a dog, whether it be a Chihuahua or a pit bull, their right is not more than your right to enjoy life to go walk in your village,” said Mohawk Council of Kahnawake (MCK) chief Clinton Phillips.

“This has to stop. ‘Oh, we’re in Kahnawake – you just want us to be like white people,’ that’s bullshit. We’re here to protect our people, that’s what is important.”

Kaymen Diabo was attacked by two loose dogs on September 13 while he was walking home from school. The incident sparked the MCK to organize a special community meeting on Tuesday evening to address the longstanding issue of pet owners letting their dogs roam off leash.

“That child is going to be traumatized for years whether that homeowner opened that door and the dog flew out or whatever the case may be – that homeowner is responsible,” said Phillips.

“If your dog bites somebody – whether it’s on a leash, whether it runs out the door, whether he jumps and breaks your glass window to get out – that’s your responsibility. There’s a consequence and get ready to pay.”

Phillips said the onus shouldn’t just be on council to fix the problem, but the community as a whole.

“Like a lot of things in Kahnawake, it comes down to a lack of respect. One agency is not going to solve the problem,” he said.

“As of two weeks ago, there’s a zero tolerance on any loose dogs. The Peacekeepers are prepared to assist the Animal Protection officers if a dog is a loose, and it’s going to be picked up. There’s no if, ands, or buts.”

Currently, Animal Protection has a three-strike rule when it comes to dogs that are picked up and identified. Any dog that bites someone is euthanized, according to the policy.

At least one owner whose dog was euthanized was in attendance at the meeting.

“I wasn’t happy about it, but I understood it,” said Brian Delormier.

“I have owned dogs all my life and I’ve always taken care of them. None of them ever bit anybody until I adopted one this past summer. It attacked a neighbour’s dog and when she was trying to get her dog away from the dog, she got bit.”

Council issued a statement clarifying that Horn submitted the request on his own and not as a council chief.

Hugh-Patrick McGurnaghan, a member of the Pit bull Association of Chateauguay, attempted to sit in on Tuesday’s evening meeting to address breed-specific legislation on communities, but was voted out of the meeting by those in attendance.

“We fought breed-specific legislation in Chateauguay for a long time. It was the worst in the world, it didn’t fix anything, it just made problems and victims of families like us,” he said.

“In August, we finally got rid of it with the cooperation of our Chateauguay government because it makes victims of people for no reason. It sounds like this is all about dogs, but it’s really about families, snatching a family member out of someone’s house just because of the way it looks is pretty un-moral.”

Despite the proposal for the amendment, the majority in the room expressed no desire for breed-specific legislation.

“I’m a responsible owner. I have a pit bull right now. He’s the most gentle dog there is because I’m good to him. I spend time with my dog, he’s not someone I just tie outside and leave him. If I did that, I wouldn’t own a dog,” said one community member in attendance.

Even though many weren’t a fan of the pit bull ban, they did express the need for amendments in the law, such as increasing the fines when animals are picked up by AP officers.

“With the legislation, we will up the amount of fines. Is it going to have the desired effect? Probably not,” said Lazare.

Others expressed the need for legislation to address animal cruelty, or for a ban on certain people from owning animals.

“If they turn aggressive it’s because you’re not treating them the way they deserve to be treated, so in the future I hope that this law could potentially ban people who are irresponsible pet owners from never being able to own an animal again,” said council chief Kahsennenhawe Sky-Deer.