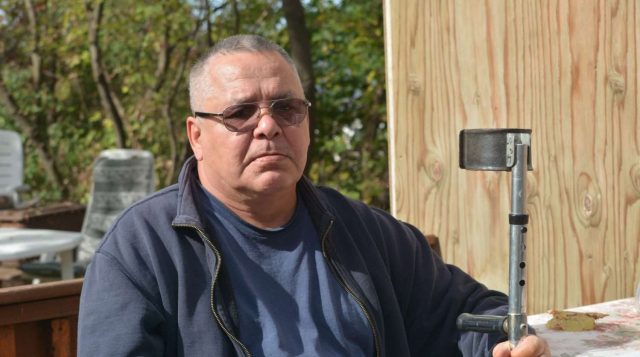 “I cannot maintain a standard of living,” said Gerald Deer-Snow, who is hoping the community can help him afford a mobility aid, which he has been rejected for. (Daniel J. Rowe, The Eastern Door)

Gerald Deer-Snow is in a bad place.

In 2011, the 60-year-old local handyman was jumped and hurt badly, permanently damaging his back.

“I got stomped on,” Deer-Snow told The Eastern Door this week.

Though he suffered a severe injury to his back, Deer-Snow continued working through the pain until his body told him it had had enough.

“I came out of it and continued going about doing handyman jobs until, I’m not sure what date, I collapsed on the floor in here (at home), and I had to have an ambulance called,” he said.

On December 18, 2014, doctors replaced two discs in his back, and noticed Deer-Snow’s spinal cord was compressed where nerves run.

“They were maybe only half pressure, so they opened it a little,” he said. “They got me back half the pressure passing through.”
Three years later, Deer-Snow is asking the community for help, as his mobility has worsened and the intense pain continues.

He applied for a motorized scooter to help him get around, do shopping and be more mobile, but was rejected twice.

He is looking for generous local businesses or individuals to help him out.

“My legs are in terrible pain to stand on, my back is killing me with muscle spasms, my right arm physically I’ve got about 20 percent on it,” said Deer-Snow.

He uses his left hand to maintain what he calls a “living standard,” but the scooter would help immensely.

Deer-Snow’s case worker at the Kahnawake Shakotiia’takehnhas Community Services (KSCS) Tom Dearhouse helps his client out by picking him up to take him shopping, do banking or other errands.

“It’s very complicated,” said Deer-Snow. “I have to set up an arrangement with him when he’s got time from his office, he comes and gets me, and we do all of this personal running around.”

Dearhouse has offered to handle any donations to ensure transparency and that all money will go towards health-related equipment. Those wanting to help out can contact Dearhouse at 514-298-4208 or Deer-Snow at 450-633-9625.

Dearhouse helped Deer-Snow with the two applications and thought his client would be a good fit for a mobility aid.

“Based on his overall mobility and health he was declined, which was surprising to me,” said Dearhouse. “He’s not going to get any better as far as the back situation.”

It’s frustrating for both men to see others on scooters, who seem less in need of such equipment.

Ideally, Deer-Snow would like to be in a care facility, but he has also had no luck getting accepted into one of them.

“I’m supposed to be in a medical facility,” said Deer-Snow. “I cannot maintain a standard of living. I’ve asked for outside help, another institution or something, and I keep getting turned down.”

The local hospital, Deer-Snow said, is not able to care for his unique needs. Deer-Snow is also hoping to install equipment in the house to help him in the bathroom and other areas of his small, roughly 10×10-metre home on Blind Lady’s Hill.

“I can hobble out to the porch on a good day, but I cannot walk to the corner store,” said Deer-Snow. “My physical ability is finished. I’m deemed unfit to work, unfit to care for myself.”

With the weather changing, Deer-Snow, who turns 61 November 7, is fearing a number of very difficult months ahead.

“I went through a couple of winters, it’s very hard,” he said. “I was told not even to stand on a step stool to try and wipe a window or anything because it’s too dangerous. If I knock the operational discs out of place, they say the surgery cannot be done over. I will be a total paraplegic in a wheelchair with no movement at all.”