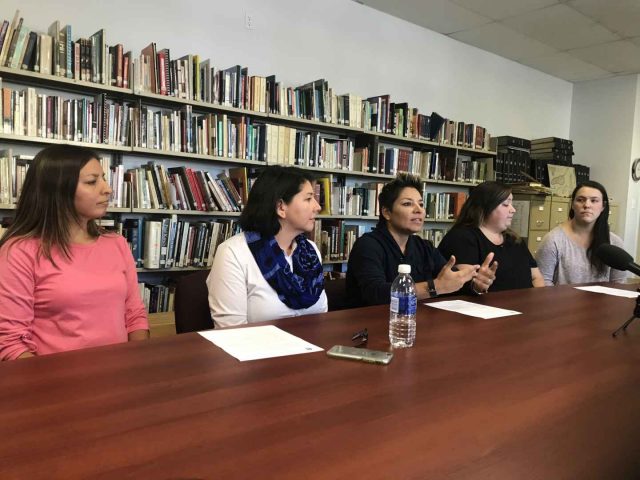 The organizations dedicated to promoting and encouraging Kanien’kéha were represented and ready to promote an upcoming celebration to kick off Spirit of Wellness Month. (Daniel J. Rowe, The Eastern Door)

To kick off Spirit of Wellness Month, the Kahnawake Language and Culture Network announced this week that it will host a two-day, event-filled celebration of Kanien’kéha at the Knights of Columbus.

The network formed in May and includes organizations throughout the community that teach, encourage or train Kanien’kéha, and promote its revitalization.

The network will host a language and culture fair November 1 and 2 at the Knights from 3 to 8 p.m.

“Basically what we want to do is showcase and highlight all of the strides Kahnawake is making in the area with regard to revitalization of Kanien’kéha and tsi niionkwarihó:ten (our language and culture),” said Mohawk Council of Kahnawake chief Kahsennenhawe Sky-Deer. “I believe that there are a lot of things to be proud of and the accomplishments and strides that have been made over countless years.”

The culture fair corresponds appropriately with the 40th anniversary of the Kanien’kehá:ka Onkwawén:na Raotitióhkwa Language and Cultural Center’s existence in Kahnawake.

“There were volunteers from around the community that came together to put in the paperwork proposal to INAC for a cultural centre,” said KOR executive director Reaghan Tarbell. “That was happening around now 40 years ago, and in January of 1978 was the first board of directors meeting, so we’re right on the cusp of 40 years of cultural centre programming services, activities for the community.”

The fair will give organizations an opportunity to showcase what exactly is available in the community, as well as showcase Kanien’kéha programs in post-secondary educations off the territory.

Bethany Douglas, the Kahnawake Education Center’s post-secondary distance counsellor, is part of the planning committee, and was at the news conference Tuesday.

“There are external educational opportunities relating to language and culture at the various CEGEPs and universities not only in Montreal, but even as far as Six Nations,” said Douglass.

A number of the institutions will be present at the fair with information on their programming.

The fair will also have booths for local artisans and practitioners of aspects of the culture, and any that have not been contacted are asked to get in touch with the language network to see about booking a spot.

Participants are encouraged to speak as much Kanien’kéha as possible throughout the interactive events, presentations, storytelling and games held at the Knights over the two days.

The language fair will differ from the annual language gatherings in Kahnawake geared primarily towards the academic side of language learning.

“This is showcasing the different resources that are available in the community,” said Tarbell. “Even though the language gathering is not just for teachers, that does comprise most of our audience for that event. This is more community-wide, so teachers, students, community members of all ages and stages to come in and participate.”