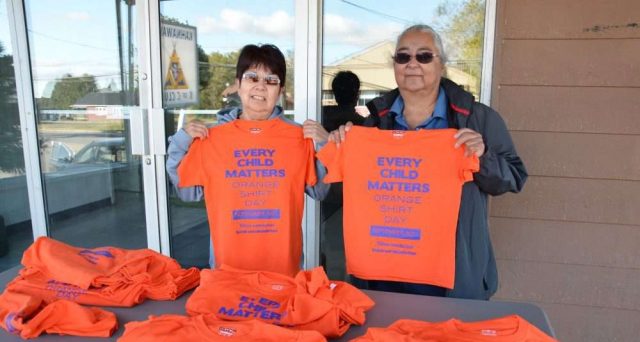 For the third year in a row, a group of Kahnawake women will bring the nationwide “Orange Shirt Day” to the community as a way to honour residential school survivors.

Today, the community is invited to gather at 9 a.m. at the green space near the splash pad for a tobacco burning ceremony.

“It’s going to be very similar to last year. Charlie Patton is going say a few words and there’s going to be some other people speaking. It’s a gathering for everyone in the community who wants to come,” said Curran Jacobs, who helped organized the event along with June Skye-Stacey, and Helen Montour.

From coast to coast, Indigenous and non-Indigenous people across Canada will wear orange on Saturday, September 30 in recognition of the harm the residential school system caused, and as an affirmation of commitment to ensure that every child matters on the path of reconciliation.

Jacobs said the committee wanted to have it a day prior, in order for students at local schools to participate.

“That’s been our focus the whole time, even with getting shirts out, the two other women that I work with, Helen and June, they’re very much interested in educating our community and a big component of that is getting it into the schools,” she said.

Montour and Skye-Stacey spent Thursday morning handing out a limited amount of orange shirts that were donated, however, they encouraged community members to whatever orange clothing they have in their own closets.

“It’s not even about the shirt. It’s about the memory and the commemoration of those who lost things and also who we lost,” said Jacobs.

“We need to really step away from the materialism of it, and focus on the symbol of the orange shirt and what it means.”

Although she grew up poor, her grandmother managed to buy her a new outfit for her first day of school. Webstad picked a shiny orange shirt, but it was taken away from her on her first day.

Webstad started the campaign in 2013 and tells her story in hopes that other survivors will feel comfortable enough to share their stories. The orange shirt has become a symbol of defiance against undermining children’s self-esteem, and their commitment to anti-racism and anti-bullying.

This is the third year in a row Kahnawa’kehró:non have participated in the annual event. At the time, Jacobs was a student at Bishop’s University.

“At the time for me, it was important to educate the people that I was in school with because I went to school with a lot of non-Indigenous people and they had no idea. So the importance of it is about educating everybody who doesn’t know – Onkwehon:we or not,” said Jacobs.

“My father was a residential school survival, so it’s very important for me and my family to keep that spirit up and to turn a negative thing that happened to be put in a positive way. That’s my goal, to take care of them, love them, and honour them,” said Montour.