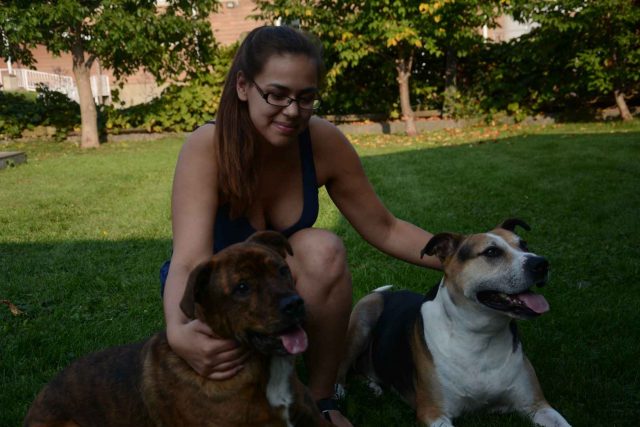 Kiera Beauvais knows, as all pit bull owners do, that her dogs are being watched closer than other dogs because of the breed’s general reputation. But like all dogs, it’s how you raise them. (Daniel J. Rowe, The Eastern Door)

Taylor McComber holds his closed hand up and says, “sit.”

Mila, a brown and black pit bull, and Busboy, a pit bull mix, both sit.

McComber lowers his hand, says, “lie down,” and they both follow the instruction.

McComber and Kiera Beauvais co-own the pets, and have felt the scrutiny their pets come with, simply by their nature.

“I get defensive over it because to me that’s like someone telling me my child is going to grow up to be a killer when you don’t know them, you don’t know how we treat them at home,” said Beauvais.

“Even my mother and father didn’t want me getting pit bulls, and now they see them and see they’re big babies and love them.”

More attention is likely coming after last week’s brutal attack by two dogs (a large lab mix and a pit bull) that left 13-year-old Kaymen Diabo with multiple bite wounds on his legs.

The Mohawk Council of Kahnawake is looking to change the Kahnawake Animal Control Law to come down harder on the owners of dangerous dogs.

“Dealing with this as a Peacekeeper we always came up against barriers,” said former PK and now Mohawk Council chief Bobby Patton, who holds the Public Safety portfolio.

“We couldn’t really hold the dog owners accountable. People are under the assumption that they can do whatever they want, but, unfortunately, there’s repercussions of being an owner of these animals.”

“Certain breeds of dogs, such as pit bulls, are considered dangerous breeds,” the letter, obtained by The Eastern Door, reads.

“These dogs, by their nature, are more dangerous due to their breeding and the fact that they are relentless in their attacks.”

Skyler Taylor lives in Chateauguay and both his pit bull mix and pit bull/boxer mix dogs have been targeted by breed specific legislation (BSL). Keeping his pets affects other aspects of his life.

“Insurance for my home was difficult,” said Taylor, who lives with his girlfriend and 18-month old son. “Although there are many dogs in the area, the inspector was only interested in the breed of the dogs.”

Taylor introduces his dogs as mixed without mentioning the pit bull parent of either one.

“It seems people have become afraid of even the word pit bull,” he said. “As difficult as it is to own and raise a dog, now with everyone looking at you because of what your dog looks like, it’s definitely more stressful.”

Montreal, Chateauguay and other jurisdictions have attempted to ban pit bulls with mixed results.

“Humans created these breeds, let them live,” said Taylor. “I don’t think a ban will solve anything. It hasn’t worked anywhere else, States or Canada, why would it work now?”

Taylor would like to see more services for dog owners, as a proactive approach.

“More real dog parks, so there are areas to exercise the animals in safety,” he said. “Provide subsidized obedience classes for all dog owners. Teach, don’t ban.”

Patton would like to steer clear of singling out one breed.

“A lot of emphasis is being put on pit bulls, but it’s every breed,” said Patton. “The accountability needs to be on the owners… When you purchase the dog, that becomes your property. You become the responsible owner of that property, so whatever these dogs are doing, you’re responsible. We’ve got to realize that and hold the accountability on them.”

“Any dog has the potential to bite,” he said. “Chihuahua to Mastiff, just like people, it’s about how you raise them.”

Beauvais also highlighted the need for owners to be accountable.

“My issue with a lot of dog owners is the lack of socialization they give them,” said Beauvais. “It’s about having them be part of the family and not chained up in the backyard or trained as a guard dog.”

Council will meet with the Public Safety Unit, Animal Protection, Peacekeepers and other relevant organizations to amend the law in the coming weeks.

“It needs to be done very quickly but efficiently,” said Patton. “We want to get away from a lot of those grey areas.”

Section II of the Kahnawake Animal Control Law reads that guardians of animals “shall confine his or her animal with a proper chain sufficient to restrict the animal,” and that “any animal which enters upon property, without being under the control or in the possession of such guardian, contrary to the provision of this article, may be seized and placed in a pound.”

“It takes work every day,” said Taylor. “Now, as the owners, my girlfriend and I need to be even more cautious of what they do since the spotlight is on their breed.”

Kaymen’s father Kirby Joe Diabo had no official comment this week when asked about the reaction to his son’s attack. He did say that his son was doing better and recovering from the traumatic attack.

Assistant PK chief Jody Diabo confirmed that criminal negligence charges are pending for the dogs’ owner. The Eastern Door asked both owners if their dog bit someone, would they be okay with it being taken away and put down?

“It depends on the situation,” said Beauvais. “I don’t want my dog to be put down because of other people’s bad dogs, who might have attacked once or twice or more and then need to be put down.

“That’s what I’m worried about. I won’t even let my dogs be outside alone for 30 seconds because I’m afraid that someone’s going to drive by and attack my dog or shoot my dog just for the way it looks.”

“The circumstances would be a factor though,” said Taylor, who said he would surrender his dog if it attacked someone.

“If it was in defence of my family or something that they did, I would consider taking defensive action.”