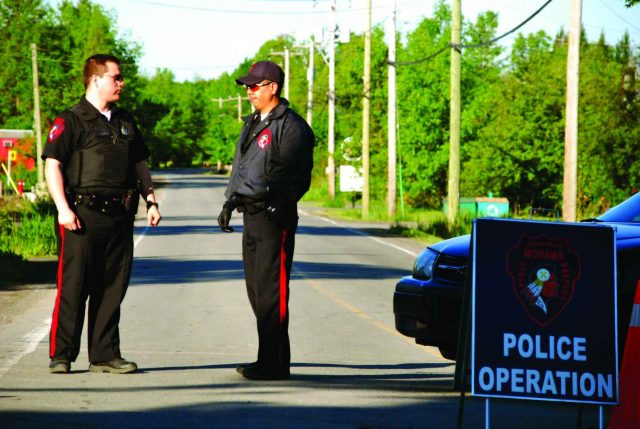 Fraud charges were laid in 2009, and the case related to Project Machine continued last week with the Quebec Court of Appeals hearing arguments for and against staying the case due to extensive delays.

Project Machine defendants Peter “Boy”, Burton and Peter Francis Rice, along with Salvatore Cazzetta, were at the Quebec Court of Appeals last week, as crown prosecutors attempted to reverse a Superior Court decision to stay their fraud case.

The five-judge panel Court of Appeal heard facts and arguments related to the fraud charges first laid June 3, 2009, but that suffered a lengthy series of delays due to the defendants being split, preliminary inquiries, and an attempt to find Onkwehón:we juror members, among other delays.

Justice James Brunton stayed the case last year after the defence filed a Jordan motion due to unreasonable delays in bringing the case to trial.

Lead crown attorney Philippe Vallieres-Roland and defence lawyer Charles Shearson argued before the court Wednesday and both told The Eastern Door the day went well, and that the justices gave both lawyers time to forward their cases.

Vallieres-Roland argued that the delays should be seen as primarily actions of the defence and not the crown.

“The extensive delays,” his argument reads, “were in fact the direct consequence of exceptional circumstances, discrete events, but especially the great lack of haste on the four respondents to stand trial on the merits.”

The defence argued that in granting the stay of proceedings, Brunton was adhering to the constitutional right of an accused person to stand trial in a reasonable time.

“In rendering Jordan, the Supreme Court reminded all stakeholders of the judicial system that the Constitution requires that the trials be instructed in good time – it is not only desirable, it is constitutionally required,” the defence argument reads.

The defence took aim at Vallieres-Roland and his team directly.

“An incoherent strategy and prosecutorial choices that conflicted with the constitutional obligation of bringing the accused to justice, in a reasonable delay, were already participating, before Jordan, to make unreasonable the encountered delays,” the defence arguments reads.

The key to the crown’s appeal is that months of delays be attributed to either the court or the defence, so that the total months of delay caused by the crown would be under the 30-month ceiling, the reasonable amount of time for a delay.

The first-instance judge subtracted seven months for delays related to Section 42, which, the crown argues, should be 33, for example. In addition, the crown argues the 15-month delay caused by facilitation conferences in 2014 and 2016 should also be waved.

In addition, the crown argued, “the chronic institutional delays at the Superior Court between 2009 and 2015, especially in the Montreal district, greatly contributed to the overall delays in project Machine,” the crown’s argument reads.

Vallieres-Roland also defended himself against Brunton’s ruling that cast him as “laissez-faire” in his attitude towards delays in the trial.

“On the contrary,” the crown argued. “They (transcripts) demonstrate the appellant’s ongoing concern regarding the delays and its proactive approach, at a minimum in line with what was expected of a prosecution team with a plan to bring the respondents to trial, as per its duty, in the pre-Jordan era.”

Vallieres-Roland told The Eastern Door that the crown’s intent was always to bring the case to trial, which the defendants did not want.

“It must be stated that the strategic choices of the four respondents, represented throughout the proceedings by seasoned counsel, had the effect of delaying the start of the trial,” his argument reads.

“There was a lot of conspiracy theories that I was actually happy that the Rice case was delayed so I could reunite it with the Hells Angels, and that I was really insisting on having the Hells Angels aspect as part of that case,” Vallieres-Roland told The Eastern Door.

Vallieres-Roland argued that because Brunton came to the case late (he replaced justice Guy Cournoyer in 2016), he did not have the detailed knowledge needed to make the decision.

“This disadvantageous position led him to commit critical errors in law,” reads the argument. “In staying the proceedings, the most draconian of remedies, he put an end to seven years of proceedings in a hasty manner.”

“Whatever errors Brunton might have made, those errors were based on evidence that was presented by the prosecution,” said Shearson.

“The defence never refused a date explicitly, we never waived to any period of delay. I think the defence was not pushing, but at least doing what it had to do in every step of the process.” Shearson added trial judges need to be the ones deciding if there is complacency, and that granting appeals on Jordan motions could open the floodgates of appeals.

“A court of appeal and the Supreme Court can set the guidelines, but their concrete applications has to be done by the trial judge, and there is nobody better placed than the trial judge to assess the conduct of the actors within the whole system,” he said.

Cazzetta’s connection to the Hells Angels is central in the case, which, the defence argued, should not be the case.

The Rice case, Shearson said, is about tobacco and fraud, and does not have anything to do with the Hells Angels as the Superior Court judge Cournoyer found.

“His basic conclusion was that there was no evidence that the Hells Angels had anything to do with it,” said Shearson.

A major cause of delay was the separation of the Rice family from Cazzetta, and the attempts to have a jury including members from Kahnawake in 2013.

The five-panel is rare in the court of appeal, which usually includes three judges.

“I think they want to make an important decision, a very lengthy decision on the application of the Jordan motion,” said Vallieres-Roland. “It should be interesting.”

Reversing Brunton’s decision, Vallieres-Roland admitted, may not be easy.

“He’s very well respected, so it’s going to be difficult to reverse his judgement,” he said.

A week prior, a decision in Ontario reversed a stay of proceedings due to a delay on the Jordan motion, which may affect the two cases heard last week.

Regardless of the outcome, Jordan rulings have pushed prosecutors not to accept any delay wherever possible.

“There are good things in Jordan, it forces us to be proactive, but the problem is that there have been a lot of stay of proceedings for big cases like murder cases, gangsterism cases, and it creates a lot of pressure on everyone, but mostly on the crown,” said Vallieres-Roland.

Shearson had a different take on it.

“Basically nothing has changed except that the accused are waiving their rights a lot more, and a lot of these defense lawyers are not even asking their clients,” said Shearson.

“They’re just waiving their rights, and a lot of the time they (clients) are not there and they’re not really knowledgeable about what they’re waiving. It has sort of become a way of working which is not very simple. There’s a lot of pressure. I find that it should work both ways.”

The court should rule on the Rice case within three months.