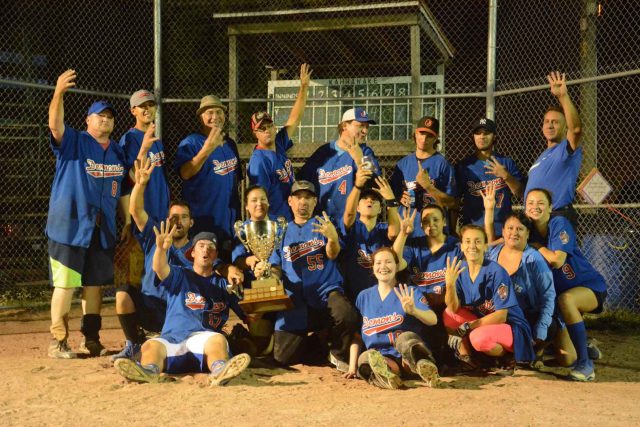 Up one game to none in the best-of-three Kahnawake Mixed Softball League finals, the three-time champion Demons were at the plate.

Darcy Barnaby was batting with the Central Station Yankees gaining momentum. The Yankees had made it a one-run game the inning prior (8-7), and were looking to build on the momentum. Barnaby popped the ball into shallow left field and Brianne Alfred started backpedalling. With an acrobatic leap and twist, Alfred snagged the ball and fell to the ground.

The ball popped out of her glove and Barnaby was safe at second.

The play proved the crucial turning point, as the Demons rang up four runs in the inning, including an inside-the-park homerun from Nick Angus.

“That was a backbreaker,” said Yankee pitcher Dan Tice of the home run. “It should be a single. It goes through the outfield, it goes through the fence, and these guys are fast. When they hit a ball in the gap, it’s a double minimum; usually a triple.”

The Yankees did not recover and the Demons won 12-7 and took the KMSL championship for the fourth straight year, cementing the team’s status as the Evil Empire of the KMSL.

They may be cocky and loud, but the Demons know how to play softball.

The Yankees gave the Demons as much as the team could, holding the champs to scoreless innings multiple times. It was the innings where the Demons ran up the score, however, that proved fatal.

“We gave them a lot of runs just by routine errors, ground balls, pop flies,” said Tice. “We just didn’t play the defence we needed and for the Demons, they have a really good defence, so that’s why they win a lot of their games. They don’t give up a lot of unearned runs. We gave up probably 10 or 12 unearned runs, and you just can’t win like that.”

Snow said the Demons have a full team with backup players in each position. The well-oiled machine has been next to impossible to beat.

“Our defence, and our bats, and our enthusiasm to play with each other,” said Snow. “Everybody has fun on our team. We love to show up. Other people don’t have as much fun as us, and when you’re having fun at something you love, you succeed.”

After Paul’s Cable (or Team Carl Horn) took the first three KMSL titles it’s been the Demons that have become the local diamond dynasty.

The champion mentality, according to Snow, came out of watching what Horn’s team was doing and figuring out a way to beat them.

“It took a lot of losing to become four-time champs,” said Snow. “We lost to Carl’s team a few times. We made adjustments, we made some good changes, we got new shirts, and we’re number four.”