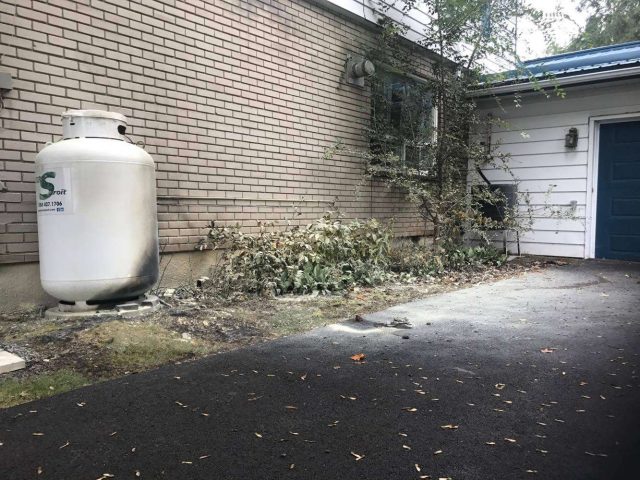 A flaming gas canister that blazed next to a propane tank was kicked away by a quick-thinking friend of one of the residents, whose house was near to going up in flames. (Daniel J. Rowe, The Eastern Door)

An attempted arson early Friday morning could have been catastrophic if not for quick reaction from a couple of residents and Peacekeeper Mikie Stacey.

Early Friday morning, between 3 and 4 a.m., someone threw a flaming gas canister near a house by the tunnel on the Old Malone Highway, close to a propane tank.

“It ignited the driveway,” said Jill Skye, the owner of two houses side-by-side that the driveway leads to.

Blast marks from the explosion show that flames touched the side of a large propane tank on the side of the house.

“I came home from work with a few co-workers, and we were in the kitchen when my brother (Cody) ran down the stairs yelling the side of the house was on fire,” said Cole Skye (Jill’s son).

“So we all run out my front door around the house and see my whole propane tank on fire and a lit gas container right next to it. So one of my co-workers kicked the gas can away from the propane tank and we called the cops.”

According to the pk report, the call came in at 4:02 a.m. and officer Stacey responded. Stacey grabbed his fire extinguisher and quickly put the blaze out. The gas canister was seized and sent to the lab for analysis.

Peacekeeper investigator Jimmy Jacco is investigating the file and had no comments on suspects.

“As of right now, I can only say that it is being investigated as an attempted arson, but that’s all I can really say at this time,” said Jacco.

Cole said he has an idea of who threw the canister, but would not give a name on record.

The family remains incensed that someone would be so careless as to throw a lit gas can near a residence.

“He is just malicious,” said Cole. “Pure evil. He does what he wants without thinking of the consequences, obviously. He could have killed me, my cousin, my brother and three of my co-workers.”

The owner of the house added her frustration.

“How inappropriate that this is in our community and in the world,” said Jill Skye. “Just the whole moral issue of trying to set someone’s home aflame is a very dangerous act.

“This is a residential home where there are people living and it’s very dangerous. You could actually kill somebody with this kind of act. People need to realize the severity of arson, especially when there are people in a home sleeping in the middle of the night. I think that’s a very serious crime.”

Kahnawake Fire Brigade investigator Wihse Stacey explained that a propane tank catching fire could cause a BLEVE (boiling liquid expanding vapour explosion). A propane tank is filled with liquid propane and when a fire is nearby that liquid will heat up and eventually boil, if hot enough.

“As it starts to build up the pressure, the release valve on the top is going to go off, and you’re going to see a flame shooting off the top,” he said. “It could be two feet, it could be 30 feet. It depends how much pressure is in there. The more this happens, the more likely that the tank will explode.”

If the tank remains upright, Wihse said, ideally the release valve will burn off all the propane.

If, however, the tank is not stored properly or there is an issue in the valve, the situation can be much worse.”

“If a tank is inverted, if the liquid is sitting in the relief valve, the relief valve won’t open,” said Stacey. “That’s when you get a tank exploding. It just needs to be warm enough for propane to boil.”

Since January, Kahnawake has witnessed over a half-dozen fires, many arson, in businesses and vehicles, and it’s a trend Skye is very troubled by.

“Something is not right here, and let’s be diligent in finding out why this is going on. Why are these things happening?” asked Skye.

“There’s no room for these kinds of things in Kahnawake,” he said. “Stuff like this isn’t supposed to happen.”

Jill added that if there was a closed circuit security camera at the tunnel entrance, and other major intersections around the community, it would aid peacekeepers in their investigation.

“Maybe it would be a great idea if we put up some video cameras at certain areas throughout our community to catch these kinds of people,” she said.

“At certain spots like the major highways and places where you could actually see. Gather some kinds of evidence… They have it in England. Why can’t they do it here? It would reduce the level of crime and it would help to keep the peace and law and order.”