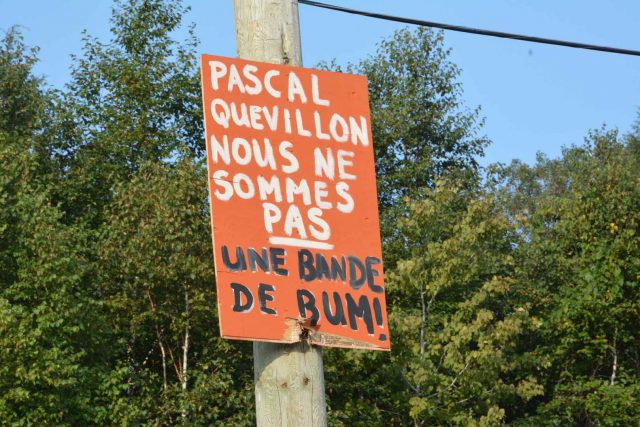 Around 125 community members from Kanesatake met with Pascal Quevillon, the mayor of Oka, and government representatives, as well as citizens of the Oka community Monday night. They discussed land disputes at the church in Oka.

Kanien’kehá:ka activist Ellen Gabriel and community members voiced their concerns over the land dispute, at times interrupted by Quevillon and other politicians present.

Gabriel questioned a representative of the Quebec government, pressing for a date when they could meet. He refused to give her a date but stated that he would call at a later day.

“Here we are in 2017, 27 years after the Oka crisis, the Kanesatake siege where our people have cigarette burns on their bodies. They were beaten by the SQ. Thousands and thousands of human rights abuses, and not one complaint was heard, not one….We are tired of fighting. How many generations more? These young people who weren’t even born in 1990, they’re taking up the struggle. It’s enough now,” Gabriel told Quevillon.

Gabriel said that they would like to have open and peaceful discussions with those living in Oka, that they value their neighbours, and look forward to working with the citizens who are open to discussions. They would also like the opportunity to have an open and honest discussion with the government.

“You will not have peace until you are honest, do things in good faith, stop telling us who’s going to speak for us cause we’re perfectly capable of speaking for ourselves,” she said.

Gabriel added that they were tired of being lied to by the government, and of seeing the citizens of Oka lied to. She explained that, for over a year, they have always heard the same answer from the mayor – that they should address their concerns to the federal government instead. According to Gabriel, the mayor could resolve part of the issue but chooses not to take any action.

As her speech ended, the mayor interrupted again, saying that the citizens of Oka should be given a chance to speak.

“We heard you, we are sensitive to you claims, to your rights, but now it’s time for the Oka citizens to talk,” he said in french.

In an interview, he repeated that he is sensitive to their rights, but that their current claims and their protests in Oka will “not be tolerated.”

“It’s an interesting discussion, but it’s a discussion that should take place at the federal level, in Ottawa…. They are aiming for intimidation, they’re aiming to provoke,” he said. “These are claims that date back 300 years. I was not there, the Oka citizens were not there.”

He added that there is nothing left for him to do, and nothing that he can do, to address their claims.

Gabriel said that the mayor has been lying to citizens, claiming that those from Kanesatake have been violent and intimidating. The purpose of the meeting was to clear this all up.

“Canada bases its sovereignty on the doctrine of discovery which, if you read the UN declaration, it says that they’re invalid and this is exactly what he and the developer, Grégoire Gollin, are basing their right to sell the land and give permits to build houses on. He’s being very ignorant,” Gabriel said.