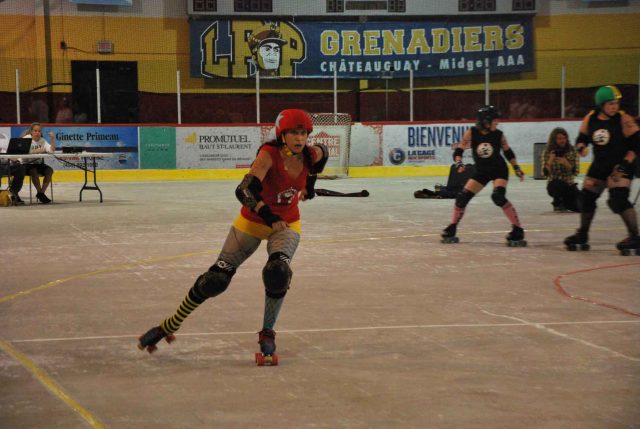 Michelle “Squarrior” Cross will be one of 20 Onkwehón:we women traveling to Manchester next year to compete in the Roller Derby World Cup. (Daniel J. Rowe, The Eastern Door)

For the first time, an all-Onkwehón:we roller derby squad will be skating on an international rink at the next World Cup.

“We didn’t wait to be asked, we threw our skates in and claimed our right to be there,” said one of the team organizers Melissa “Mick Swagger” Waggoner.

“The team was created to include Indigenous women roller derby players from around the world who feel that the colonized nation they reside in does not fully represent who they are as an Indigenous person.”

The team announced its roster last month, and consists of 20 Indigenous women from across Turtle Island including Kahnawa’kehró:non Michelle “Squarrior” Cross.

“When they announced the team and saw my name at the bottom with Kahnawake on there, it was surreal,” Cross told The Eastern Door.

“I never thought I’d be traveling for roller derby, let alone on for a World Cup tournament. It’s a big thing for all these nations and women combing together.”

Cross has been involved with roller derby for a decade, and also helped start a team in Kahnawake in 2015. Although the team has since disbanded, she continued playing in the Montreal Roller Derby league for team La Racaille.

Since the women on the team live across three different continents, getting together for practice as a group will be a challenge.

“Right now, we have our Facebook page to talk back and forth to discuss different things that we’re doing. Most of us are on off-season, so we’re in gym, and share different exercises to do at the gym, endurance training, and for myself, I think I’m going to try a Monday pick-up league in Montreal just to keep training,” said Cross.

The Roller Derby World Cup takes place February 1-4 in Manchester, United Kingdom, and will be hosted by Rain City Roller Derby. Forty teams will be competing, with team Indigenous being one of 10 competing in the tournament for the first time.

“This team affords us the opportunity to use roller derby, an already feminist strong athletic revolutionary space, as the platform to explore our identities as Indigenous women, share our traditional knowledge, and within our own tribal matriarchy realize our power as women warriors without borders,” said Waggoner.

“We are the first all-Indigenous team to take our place among our peers and represent our ancestral nations at a World Cup event, this is ground-breaking and we are proud to be the first to claim this right.”