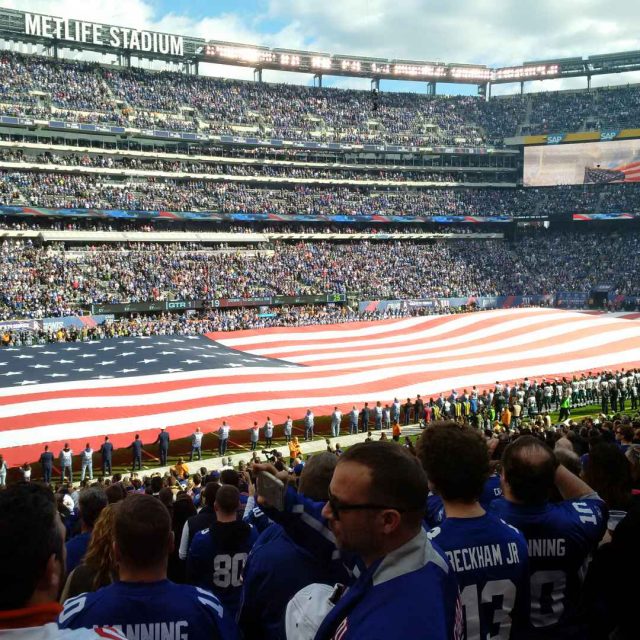 NFL football games on the weekend were replete with remembrance ceremonies and events honouring victims of the terrorist attacks 16 years ago that took lives and cancelled games. (Courtesy Mike Delisle)

Sixteen years ago Monday, four planes were hijacked, two of which crashed into the sides of the Twin Towers, destroying the structures, traumatizing a nation, changing political debate, and, perhaps near the bottom of the list of monumental outcomes, cancelling the weekend’s NFL football games.

Though not as consequential as the wars started after the attack or the change in domestic security policy, sports leagues commemorating the terror attacks have become an annual event.

“Yesterday, a whole bunch of memories came up on each of the sports teams I follow, and that’s every single (New York) team,” said Lou Ann Stacey, a diehard fan of all teams New York, where she grew up. “Memories from 9/11, and how each of the teams in terms of the sports were more focused on the city and the people than the sport.”

Immediately after the attacks, sports teams, particularly baseball (in its final months) and football (week two), could not go a week without doing something honouring firemen, police, victims or the city itself.

“Every sporting event, especially those games, was wrapped around a tribute or a remembrance,” said Yankee and Giants diehard Mike O’Brien. “It was so close to home for everybody. It was front and centre of everything that happened.”

The NFL’s week two games (September 16-17) were postponed and played in January.

“When they finally did come back, it was all about it,” said O’Brien. “For football, opening day is always chalked full of fanfare, and patriotic fervour. This was even 100-fold.”

Mike Delisle, who bleeds Giants blue, attended a game at Giants Stadium in 2001 with his brother-in-law, who had just graduated from the Local 40 ironwork apprenticeship.

“It was scary,” he said. “Driving down the BQE (Brooklyn Queens Expressway) towards the tunnel, the two or three middle lanes of the highway had been jersey-barriered off, and they were just full of fire trucks, ambulances, police cars, first responder vehicles, crushed, burnt, dusted all the way, and it’s got to be a three-mile stretch all the way from Brooklyn to Manhattan.”

Six weeks later, Delisle could still see smoke coming out of the hole where the trade towers once stood.

The game’s security did not assuage Delisle’s fears that he was safe.

“We thought security was going to be extremely tight, but I could have drove my Tahoe into the parking lot full of explosives and no one would have even known,” said Delisle. “It was scary.”

Delisle was no stranger to live games, but in 2001, the atmosphere changed.

“I never thought of it before because I’d been to games for six or seven years before that, but when you’re sitting there with 75,000 people and you can see smoke coming across, it’s disconcerting for sure, and it was a nationally-televised game, a Monday night game, so if you want to do something again, boom,” said Delisle.

Like the New Orleans Saints post-Katrina, Houston post-Harvey, or other cities who witnessed major tragedy, sports fans in New York in 2001 looked to the Giants, Yankees, Mets, or Jets to find something normal.

“It’s to restore a sense of normalcy and a sense of pride, and vanquishing the badness that happened,” said O’Brien. “Even though it has nothing to do with it, but by us going back and winning the World Series or winning the championship shows that the city can rebound and beat that down.”

The Yankees, of course, lost in seven games in the World Series to the Arizona Diamondbacks, an outcome that still annoys O’Brien.

“Even today it always bugs me that (Yankee closer) Mariano (Rivera), who was like Mr. light’s out, perfect, unflappable, is the one who made the throwing error, and let the bloop singles go off him,” said O’Brien.

“We were supposed to have won this one because we were the standard bearers of trying to get the country back into its normal routine. It would have been the right karma or kismet or something for the Yankees to win the World Series after 9/11. It was supposed to be.”

Though gripes about losing remain, sports fans were reminded in 2001 that, indeed, it’s just a game, something fanatics at times struggle with.

“When you’re a sports fan, you focus on the sport, but it just goes to show the human aspect of sports,” said Stacey. “That we’re human beings first. As a diehard sports fan, I forget that. Most sports fans forget that. For the first time in sports, it showed the human side of things.”

Disasters that followed 2001 in New Orleans, Boston, Manchester and most recently in Houston and Florida have followed the same template with fans across the leagues dropping divisional rivalries, petty feuds and competition for moments of silence and/or respect for the affected city.

Seeing the role sports played in helping people heal was inspiring for Stacey.

“I liked them even more because it just reminded me of how great sports is,” she said.

One thing O’Brien would like to see changed involves the scheduling. This week, Monday Night Football featured New Orleans versus Minnesota and the LA Chargers versus the Denver Broncos.

“Opening week should be in New York,” he said. “The Giants should be playing, and should open that weekend.”