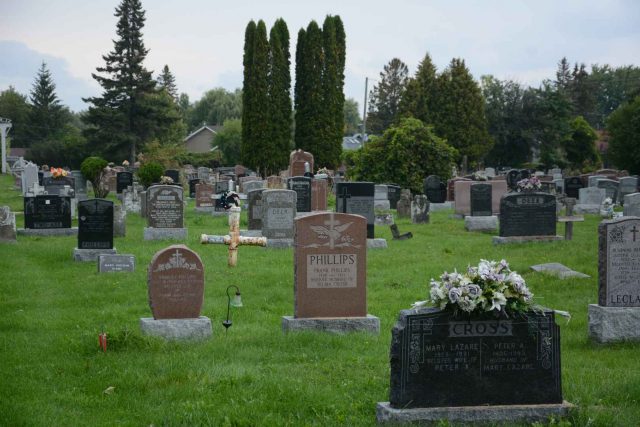 Those looking for a loved one’s final resting place can now access a database at the Catholic Church thanks to a gift from a friend in New York, who met the late Johnny Jocks when he was six years old and always remembered his promise to visit him in Kahnawake. (Daniel J. Rowe, The Eastern Door)

Two friends from two cultures forged a friendship on Coney Island that resulted in the mapping of two of Kahnawake’s cemeteries in desperate need of being catalogued.

Ralph Perfetto, an 83-year-old retiree living in Brooklyn, decided to visit his late friend Johnny Jocks (who died in 2001) in Kahnawake, and, in honour of his friend, mapped the Catholic and Protestant Cemeteries for the people he had grown up learning about from an ironworker’s wife.

Perfetto and Jocks attended Our Lady of Solice School on Coney Island, and became friends immediately.

“When I was six years old, my mother brought me in, and I’m this skinny little kid with a very nervous stutter, and, in Catholic school, I’m left-handed which is a strike against you, so I was like the butt of everybody’s joke, and the boys liked to ridicule me to attract the young girls in the class,” he said.

“Johnny Jocks was three months my senior – he was born in April, I was born in July. He was quiet, he was well-mannered, and he was observant. He sort of got the lay of the land in the class, knew what was expected of us, so to be honest, I looked to him for leadership.”

Johnny was the son of Tom Jocks and Alice Norton Jocks, who lived at 2822 West 16th Street, while Perfetto lived at 2849 West 16th.

“It was common for me to go to his house and do my homework with him in the living room,” said Perfetto. “I was constantly asking Mrs. Jocks about the Mohawk culture. I was just so interested in it, and she would pull out a map – she was always patient with me – and she would show me the different nations… All the north-eastern nations.”

Perfetto learned of the Carnasee nation that once inhabited Coney Island where he and Johnny grew up, and stayed in touch with his childhood friend, who became an ironworker in New York before returning to Kahnawake when he retired.

When Johnny returned to Kahnawake, he remained in touch with his childhood friend often asking Perfetto to come to the community to check it out.

“He said to me, ‘Ralph. Whenever you want, just show up at my door. We have room for you,’” said Perfetto. “It was that that kind of open invitation, but I was always involved in one thing or another, and I would always say ‘next year, next year, next year.’”

Johnny died in 2001, while Perfetto was involved in a hotly contested mayoral campaign.

“Things started to slow down only a couple of years ago for me, and it bothered me that I never took Johnny’s invitation up,” said Perfetto.

In May, Perfetto decided to honour his friend’s invitation and visit Kahnawake to pay his respects where Johnny lay in the Catholic Cemetery.

“When we went there, we had difficulty finding the grave,” said Perfetto.

Former Mohawk Council chief Davis Rice met Perfetto while doing a tour of the community, and helped him locate the grave.

The two located Johnny’s grave, and Perfetto was able to finally meet his childhood friend in Kahnawake.

Then, Perfetto had a thought.

“When we were coming out of the cemetery, I said to him, ‘there’s nothing mapped over here. Other than the family who buried the individual, how do you know if you want to visit the grave?’” said Perfetto.

“On the way home I said to my son, ‘that might be a way to honour my friend. To go up there, get permission to do the cemetery and catalogue it for them,’” said Perfetto.

Perfetto contacted the church’s financial clerk Kelly Robertson at the St. Francis Xavier Mission, who was excited to have a professional map the cemetery.

The church had plans to map the cemetery, but were struggling how to find funding to start the project.

“It just so happened I got a call from Ralph, and we were on the phone for about 45 minutes,” said Robertson. “Then a day or two later, Davis comes in and says, ‘listen. I started doing this work,’ and I just said, ‘stop.’”

Rice put together a proposal to funding to map the cemetery, and planned to pay for Perfetto’s room and board, which he refused.

Perfetto visited a Home Depot in July, bought treated aluminium and some stanchions and started building a map at the beginning of August by dividing the cemetery into three sections. As the rows are uneven, Perfetto divided the sections into 100-foot boxes.

“Then I would be able to catalogue everything in each box,” said Perfetto.

Perfetto witnessed the teams of community members who volunteer time and equipment to work in the cemetery, trimming grass, planting flowers and beautifying the areas surrounding family members’ and friends’ gravesites.

“It’s a wonderful thing to see the respect they have for their deceased members of their family, and all that was going on while I was in there,” said Perfetto.

Rice assisted Perfetto in labelling the rows and grave numbers.

“He showed me what he was doing and then we did it,” said Rice.

“So many people were just so happy that I did that,” said Perfetto.

Perfetto’s partner Marie Ortel made spreadsheets of all the information, organizing it by section and last name, and Perfetto delivered them to both churches, Davis Rice, the cultural centre, the Kahnawake Welcome Center and the Mohawk Council.

“It was beyond amazing,” said Robertson. “There are not enough words to thank him, but we have a friend for life now, so that’s good.”

Now those wanting to find a loved one need only search by name, and will be directed to the plot.

“My friend Johnny now is in section three, area one, row four, grave 13,” said Perfetto. “So if anybody wants to visit him, there’s no doubt what they have to do.”

Robertson said there is still work to be done, such as determining accurate dates that may follow the Canadian (month/day/year) or American (day/month/year) system, correcting certain Kanien’kéha names, and other details.

“We have a lot of work ahead of us, but thank God for community members coming together because I’m going to be using some of the elders for the unmarked graves,” said Robertson.

Council chief Clinton Phillips was blown away by the work Perfetto did free of charge to honour his friend, and gave Perfetto a gift he will cherish forever.

“From the bottom of his heart, he said to me these words exactly, ‘you are truly a friend to the Mohawk Nation,’” said Perfetto.

“He had no idea what he just said to me, and what that meant to me because my first and most loyal friend was Johnny Jocks, and here’s a chief who’s telling me that I’m truly a friend of the Mohawk Nation. That man has a friend in Brooklyn forever.”