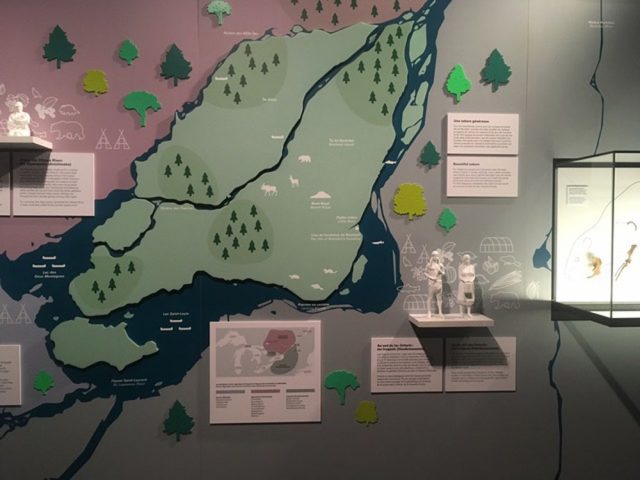 When Russell Imrie visited Pointe-à-Callière earlier this summer, he noticed something strange on a map that’s part of the museum’s new permanent exhibit dedicated to the 375th anniversary of Montreal.

“I was walking around there with my little curious grandson and I was looking at the map. What stuck out was Tekakwitha Island. That was made in 1956, then I realized it had the seaway in it too,” said Imrie.

The problem? The floor-to-ceiling map is a small part of an exhibition Where Montréal Began about the founding of Fort Ville-Marie in May of 1642, well before St. Lawrence Seaway construction began in 1954.

“Rarely have I seen anything as current and as obvious as the misrepresentations impacting Kahnawake as the map at the museum. My eyes popped when I saw the juxtaposition of bears and wolves and the new Tekakwitha Island and the Seaway cutting of a huge part of Kahnawake,” said Imrie.

“That was an obvious mistake. It’s like making a map of 1700 Panama, except there’s the Panama Canal there. For a museum, that sort of mistake should not happen. It shouldn’t be like that because it’s sort of like redrawing history.”

The permanent exhibition opened at the Old Montreal archaeology and history museum in mid-May, as a part of their seventh pavilion, a heritage legacy project for Montreal’s 375th anniversary.

In addition to paying tribute to Paul de Chomedey de Maisonneuve and Jeanne Mance, the exhibition leads visitors across a glass floor overlooking the remains of Fort Ville-Marie unearthed during various archaeological digs conducted by the museum from 2002 to 2015. Numerous artifacts found during the digs are also displayed, including some from Haudenosaunee, Algonquin and Huron communities.

Louise Pothier, the archaeologist in chief at Pointe-à-Callière, acknowledged the mistake when The Eastern Door contacted the museum last week.

“As a way to explain the environmental context in the crypt that we call the pioneer room, we have a wall on the right side where we present the land and land around the island of Montreal,” said Pothier.

“It’s our mistake to not have taken more attention to the background that the graphic team took. We all know that in the 17th century, there was no seaway at that time.”

She said that Imrie, who filed a complaint about the map, was right to bring it to the museum’s attention.

“I don’t dismiss the responsibility. We are completely aware of the different sensibilities and sensitivities regarding the territory, my only concern now is to see with the graphic firm that did the wall, what we could do to modify the line of the shore,” said Pothier.

Imrie said the museum’s response was reasonable, and he’s glad they’re going to make an effort to correct the mistake.

“It matters a lot, it’s the only territory we have. I used to swim in the river as a kid, then they put the seaway there,” said Imrie.

“The irreparable damage done to Kahnawake is a prime example on making Indigenous people bear the cost of development that does little or no good for those communities.”

The construction of the seaway is also something Imrie and his family has felt the direct consequences of. His great-grandfather Louis Ahnionkwen Diabo was one of the Kahnawa’kehró:non whose land was expropriated for the project.

“His farm was wiped out,” said Imrie. “My great-grandfather he died right after that, in January 1957. He finally caved in. He was the last guy out there, he wouldn’t move for the seaway.”