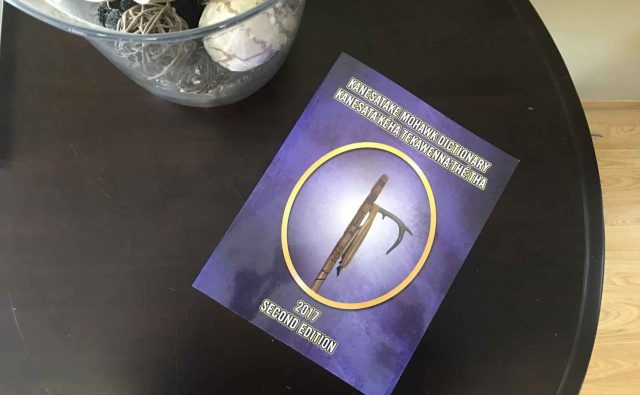 Elder Harvey Gabriel has translated the Bible and many other forms of scripture, but in order to share his knowledge of the language to a broader audience, he launched a dictionary back in 2014 to serve as a guide.

Once it came out he soon realized a second edition would be needed, and more and more, as he read his old Mohawk books dating back to the 1700s, he made notes of what should be in it.

Fast-forward to last week’s Kanehsatake Powwow, and the second edition of his dictionary, complete with 23 more pages English to Mohawk, and 11 pages Mohawk to English, was launched.

“It all started when I was translating the Bible. I found some interesting words in there,” said Gabriel. “I have a lot of old books in Mohawk, so when I’m reading them I put them in my dictionary, so that’s where those words come from.”

The first thing you notice whenever you talk to Gabriel, is he doesn’t use the term Kanien’kéha, preferring, instead, the term Kanesata’ké:ha, which may be a more localized dialect of the language, but is more similar to all of the communities than it is different.

Gabriel sold the last copies of his first edition last year to a group in Six Nations, and also has fans in Kahnawake, including Gary Horn.

Horn does translation with a small group mostly every Thursday for six hours, much of which is for the Jehovah’s Witnesses Kingdom Hall in Chateauguay, to which he belongs.

Horn and his group are responsible for translating the literature that is brought door-to-door in the language in Kahnawake.

“I enjoy learning the old words,” Horn said. “There aren’t many I don’t understand.”

Horn has been visiting Harvey for about five years and he consumes mostly everything Gabriel produces in Mohawk.

Gabriel had his printer rush a few hundred copies to get ready for powwow, but he ordered 1,000 copies in total.

The dictionary has many words no longer used, and also has a part at the back with some illustrations.

His books are requested in Ohswé:ken, Kahnawake, Akwesasne and Tyendinaga, and he has yet to make contact in the smallest Kanien’kehá:ka community of Wahta.

“I want to thank Kahnawake in particular for supporting me and I will be donating to Survival School again and the language program in Kanesatake,” he said.

“I feel good. I’m very happy and glad to share my words and language with other people and communities. I like to pass my Onkwehonwehnéha language to other communities.”

There are many cool parts to the dictionary that make learning easier for all levels. Spider, for example, is listed as ta’kawh’áhson – the same word used for cancer.

“Some of those old words I haven’t heard in a long time. There’s only a few words I really had to study the meaning,” said Gabriel, who breaks down words he doesn’t understands into “little syllables and then I get the meaning of it.”

One of those words from 1839 was Entkatsinon’onhkwarotáhkwatá:nion, which means “the wind will pull roots right out of the ground like tumble-weed in Arizona or out in the prairies.”

“Back then, they used a lot of Ys and Ds, but I don’t use those letters – I write it how we write here, with our letters,” he said.

Gabriel also previously translated the Bible, along with the books of Daniel and Jonah, among others.

He did all of the definitions of the words on his own, but his wife Susan and daughter Cheryl helped proofread translations into English. Cheryl also did some of the artwork.

“I like to work on my own when I’m translating something into Mohawk. I like to be alone, quiet,” said Gabriel.

Working alone, he said, means he “has no arguments from anyone about the meaning of any words.”

His previous books went all over the United States and Europe to interested readers.

He also launched “A collection of stories of my lifetime,” in which he touches on a rich personal and community-wide history of things he heard as a boy into today, always listening and learning.

“A lot of people used to tell me why don’t you write stories of what you know, so we can pass it on to the people. It’s the story of my life, which almost sounds like country music,” he laughed.

“Some people would giggle when reading it, which is good, I wrote it to wake up people and to make them laugh at the same time.”

To order a dictionary or his short stories, email Harvey Gabriel directly at: Satewas.gabriel@gmail.com.