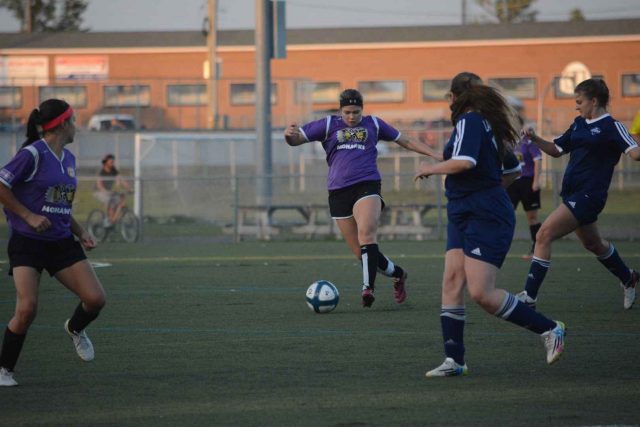 The Mohawks U17 team ended the season in style with a 4-2 win Wednesday night with an all-around fine performance. (Daniel J. Rowe, The Eastern Door)

The Kahnawake Mohawks’ soccer teams wrapped their seasons this year with playoffs on the horizon for the Under-12, and U10 sides.

The U17 Mohawks squad was young, but talented, and had a quality development season though the girls failed to make the playoffs, despite winning the final game 4-2 Wednesday night.

“It was rough,” said defender Casey Goodleaf. “At first we didn’t really know each other or how we all played. Slowly we got better as a whole and it was noticeable every game we were doing better.”

Goodleaf said the team remained committed throughout the season and named competing in the North American Indigenous Games in July as a highlight.

“NAIG was an amazing experience for all of us and we all grew as a team and grew into better soccer players,” she said.

Midfielder Iakaonhawinon Mayo, like Goodleaf, inherited a leadership role this season and helped some of the girls as young as 12 and 13 learn the finer points of the game.

“Being a leader to many of the younger players was tough in certain situations, considering you have to show them the way of the game and how to react, but I loved being able to be a role model to them and pass on some knowledge of the game,” said Mayo.

The U21 squad coached by Bronwyn Johns had a tough adjustment period after a silver-winning performance at the NAIG, and was forced to forfeit its playoff game against Soulanges Sunday due to lack of players.

“After NAIG we lost our groove,” said attacking midfielder Journey Jacobs. “Leah (Element) and I are both hurt right now, so that’s a huge issue.”

Neither player was fit Sunday, and Johns tried in vain to have the playoff date to be changed, as he squad was short. League organizers would not, and the team ends its season with a whimper of what could have been.

The U10 Mohawks, coached by Rachel Leborgne and Katsi Snow, play tonight at the Sports Complex against Soulanges at 6:30 p.m. in the team’s first playoff game, while the U12 girls play tomorrow at the same time at Leopold Carriere school against Soulanges