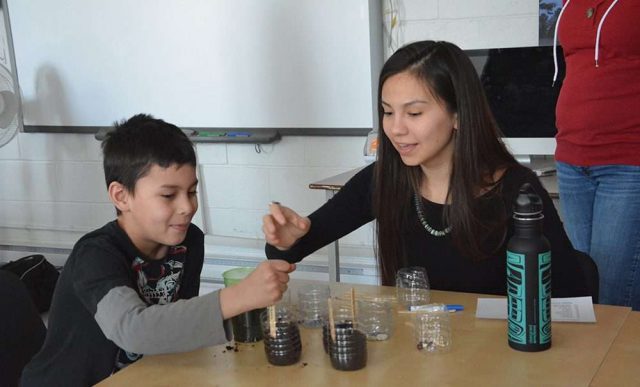 Ratiwennahní:rats students will now have a helping hand as they work through their two-year immersion program, as an unlikely funding source came through last week. Karennenhá:wi Goodleaf (right) graduated from the program in 2016. (Daniel J. Rowe, The Eastern Door)

Students who take the plunge and enter the Kanien’kéha Ratiwennahní:rats Adult Immersion Program dive into more than a pool of sometimes tough language lessons at the Kanien’kehá:ka Onkwawén:na Raotitióhkwa Language and Cultural Center (KOR).

In addition to mastering their Kanien’kéha reading, writing, listening and speaking skills, students must find ways to pay for day-to-day expenses like rent, bills, heat and hydro.

As of this year, eleven students in the program can let out a sigh of financial relief after the Kahnawake Education Center announced this week that Indigenous and Northern Affairs Canada (INAC) approved $188,060 per year for the next two years for the post-secondary program, including $77,500 to fund nearly a dozen students in the immersion program.

“It was not expected, it was a surprise on our part; a very pleasant surprise,” said KOR public programs supervisor Lisa Phillips.

“They promised new dollars in post secondary, and contrary to the Harper government, who was axing post-secondary, they were going to turn it into a bursary (program). They’ve held true to their promise and they’ve given immediate dollars, which is great.”

Having the program recognized and funded is a huge boost in terms of recognition.

“Why it’s groundbreaking is that it’s the first time that they (INAC) actually recognized the cultural centre as a post secondary institution,” said Diabo. “It’s huge.”

“That says a lot for the authenticity of the program, that they see it as being a valid post-secondary program,” said Phillips

Phillips added that other organizations in the community have helped in the past to assist students. Tewatohnhi’saktha, the education center and the social development department of the MCK have always helped to find funding for students attending the two-year full time program.

“All of these past years we’ve received support and they’ve worked with us to offer allowances to our students that fit within the criteria of these organizations,” said Phillips.

“But sometimes, due to restrictions for their funding, they may be limited in their ability to do so. The intent is always there for them, but sometimes they are limited due to their funding requirements.”

This year, just as staff was about to sit down and work out funding options for the students in the second of two programs, Douglass contacted the KOR asking for a meeting, with the pleasant surprise.

The extra funds are a huge boost to the 11 students.

“The feeling that it caused over here was awesome,” said Phillips. “It was like, ‘oh my god. We don’t have to worry about this.’”

Douglass knows people who have taken the program, and been forced to go on social assistance to help them pay bills over the two years.

“There are a fair amount,” she said. “We can see when they hand in their funding applications there’s a line that says, ‘are you currently accessing EI/SA/Workers Comp?” So that’s how we can tell.”

“They seem like they’re very, very open to fixing the issues that we have,” said Diabo, who hopes the funding is part of a trend that continues.

“Hopefully they do recognize the program long-term and allow us flexibility to be able to do more things like this with KOR to preserve and save our language,” said Diabo.

Diabo was in Ottawa Tuesday to discuss the problematic Post Secondary Partnership Program initiated by the former Conservative government, which he said on multiple occasions has been “mishandled.”

Diabo criticized the national review panel that needs to be overhauled.

“We said, ‘you need to return these programs to First Nations control,” said Diabo. “I told them, ‘your program’s a joke.’ They sat there and took it, and they were nodding.”