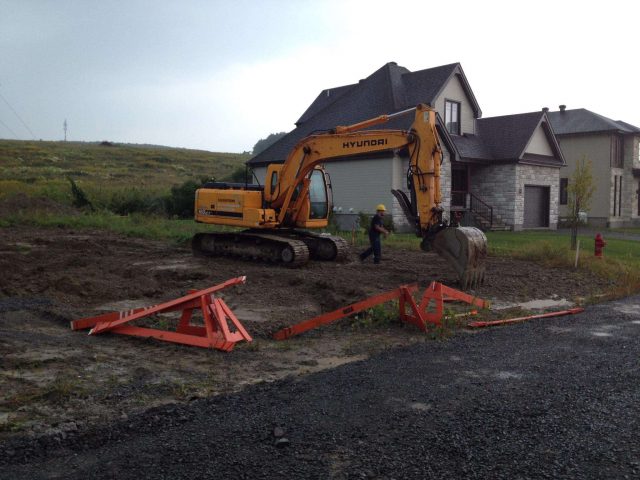 When Ellen Gabriel showed up at the Collines d’Oka just outside of the Village of Oka, a non-Native development in the shadow of the famed Pines in Kanesatake, she was incensed at what she saw: another hole being dug for the foundation of a new home, despite continued calls to halt all construction.

Contractor Hugo Dagenais, who was operating the large digger, spoke to Gabriel to get a clearer understanding of why she and two supporters were there.

Once it was explained, Dagenais said he supported the people, and covered up the hole for safety. He later removed the big machine from the land that night.

The owner of the home, an older French-speaking man, sympathized with Gabriel and Kanesatake Mohawks, saying he would wait a year if need be until the issue was resolved, and he would wait for “their permission.”

“He told us he invested all of his retirement money into this land, and that he loved it and wanted to retire there,” said Gabriel. “I said ‘give me at least a week to figure out what the people’s interests are.’ He agreed.”

Indigenous Affairs minister Carolyn Bennett was slated to call Gabriel Thursday but has been silent.

Gabriel sent an email to her, a copy of which was forwarded to The Eastern Door.

“Your silence and inaction has been worrisome and further contributes to the conflict of this land dispute,” Gabriel wrote to Bennett. “We strongly urge to immediately suspend any negotiations with the Mohawk Council of Kanesatake, that result in the termination of the Kanien’kehá:ka of Kanehsatà:ke’s ancestral land rights.”

Quebec minister responsible for Native Affairs Geoffrey Kelley told Gabriel he didn’t want to get involved directly because land claims are not his jurisdiction, but she told him it was a “derogation of their fiduciary duty” on Ottawa’s part, and had “nothing to do with land.”

The municipality is also at fault, Gabriel said, because “they know this is contested land and they continue to allow it to be sold.”

Gabriel and the Longhouse in Kanesatake met Wednesday night to discuss what to do next.

“We sold this piece of land, and it has been re-sold by another citizen,” he said, of the specific piece where construction was halted.

“The first owner was not able to get a permit because his plan was not accepted for this section. That owner bought other land and sold this one,” said Gollin, adding the previous owner built a home within the development after selling the piece of land that was in question Tuesday.

“We are dividing the land into lots and selling to citizens. In fact, in 10 or 11 years, we sold about 10 lots a year,” said Gollin.

Gollin recalled a meeting with former MCK chiefs who sat down to discuss the development “in 2003 or 2005.”

“They said ‘okay, we have no objections, but one condition. You know this forest had been planted by our ancestors, so it is very important to us and we ask you not to do anything in that forest without our approval,’” he said.

“We made an agreement but we did not sign anything. I said ‘you have my word. Anything I do on this piece of land you will  be called and consulted,’” Gollin said.

Former Mohawk Council chiefs released a statement recently, signed by five former members who were on council in 2003, including grand chief James Gabriel.

“The undersigned are upset at such an outrageous statement on the part of Mayor Quevillon…. we re-state, that the undersigned never agreed in writing nor verbally agreeing to the “Collines D’Oka Housing Development Project.”

The letter came out on August 7, four days before one was sent by the present council, which also called out, with similar language, Oka mayor Pascal Quevillon for saying a deal was made between Gollin and the previous council in 2003.

“Mr. Mayor, your statement is down right (sic) inflammatory and has caused unnecessary dissention in our community,” it reads, asking for a public written apology and a retraction.

“It was a wide-ranging discussion. Once or twice a year I like to go out and just talk about a broad range,” he said.

“So I think more work has to be done to come up with a durable solution on the land issue.”

He spoke of other issues as well, including the spring floods that hit the community hard, but the focus in Kanesatake these days is land.

“Obviously the relations between them and Oka are a bit of challenge right now, so that’s something that we would like to work on to improve as well. I went to look at the Collines, and it’s a bit odd because it’s not a new development. The first houses were built in 2003, so why all of a sudden has it become a hot button issue?” he asked.

Kelley is looking into one of Gabriel’s other concerns – archaeological digs going on at Oka Park, with no information being shared with Kanesatake.

“There are questions about what has been found and what happened to those artifacts,” said Kelley. “I will find out.”

“The government doesn’t have a right to pick and choose who they’re going to speak to,” Gabriel said, of Bennett’s silence.

“They’re supposed to be open to speaking to anybody, and they know there are people who don’t recognize the band council system, yet they’re still insisting that’s the system to go through.”