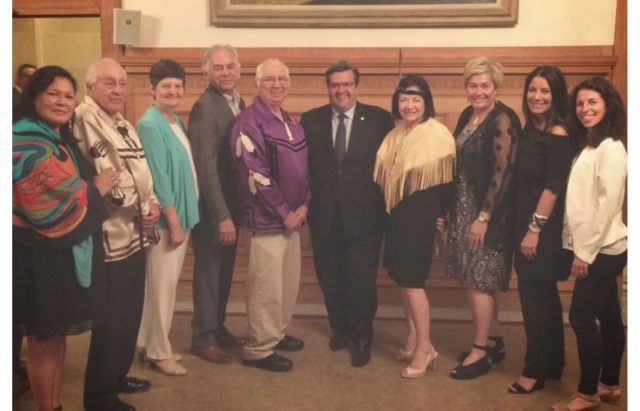 Several Indigenous dignitaries were in attendance at a city council meeting on Monday evening to witness Montreal endorse the United Nations Declaration on the Rights of Indigenous Peoples.  (Courtesy Jules Chamberland-Lajoie)

Montreal’s city council unanimously adopted a resolution this week endorsing the United Nations Declaration on the Rights of Indigenous Peoples.

The resolution was passed on Monday evening at a city council meeting.

“It is with great pride that the City of Montreal formally endorses the United Nations Declaration on the Rights of Indigenous Peoples. But with this sense of pride come also responsibilities,” mayor Denis Coderre said in a statement.

“I am pleased that mayor Coderre and the city council have taken a leadership role in acknowledging the declaration,” said Zachary-Deom. “I was especially happy and proud to have witnessed the special recognition given to Kenneth Deer, who has given so many years to the creation of this historic document.”

To date, the declaration has been endorsed by nearly 150 countries, including Canada, and is the most comprehensive international instrument on the fundamental rights and freedoms of Indigenous Peoples.

“I’m very happy that Montreal endorses the declaration. They’re the third city in Canada that has done the same thing. It’s good that cities with large Indigenous populations are doing this,” said Deer.

He said the question is now the practical application of the declaration.

“The endorsement is symbolic right now until they show how they’re going to apply the declaration in a practical way,” said Deer. “You can pick an article in the declaration and see how the city could use the articles.

Jules Chamberland-Lajoie, a spokesperson for the city, said there are plans to use the declaration as a guideline to further develop its reconciliation strategy.

The strategy will be outlined on September 13, which coincides with the city collaborating to celebrate the 10th anniversary of UNDRIP, with the Assembly of First Nations of Quebec and Labrador, and the Canadian Commission for UNESCO.

Chamberland-Lajoie said the city has already started to implement UNDRIP, including developing a process of consultation with Mohawk and urban Indigenous communities within different areas.

“The city has consulted Mohawk communities to chose the name of the “Tiohtià:ke Otsira’kéhne Park,” also as a way also to promote Indigenous cultures and languages. The city also wants to use other toponyms in Indigenous languages,” said Chamberland-Lajoie.

“The mayor of Montreal and the city’s councilors regularly acknowledge that the city is on traditional unceded Indigenous territory.”