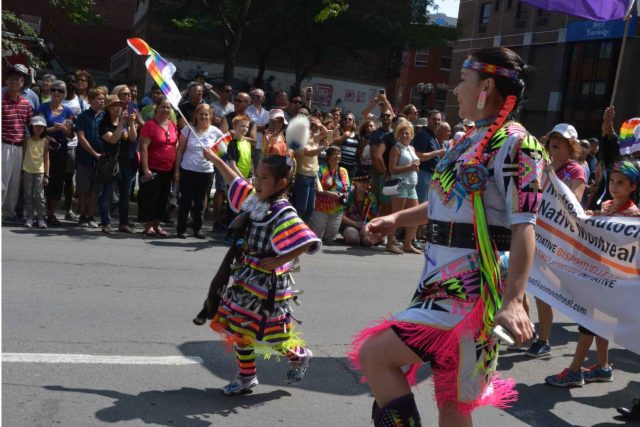 Several Kahnawa’kehró:non were among a contingent of Indigenous people that danced and marched in Montreal’s Pride parade on Sunday afternoon. (Photos Jessica Deer, The Eastern Door)

For the first time, Montreal’s annual Pride parade was led by a large group of Onkwehón:we, including several Kahnawa’kehró:non.

While Indigenous people have served as grand marshals at past parades, organizers wanted greater involvement from at this year’s festivities to acknowledge the city is on traditional Kanien’kehá:ka territory.

“Celebrating the 375th anniversary of Montreal, it is the perfect year to remember that Montreal is an unceded territory that belonged to the Mohawk. It’s super important to remember the roots and who built this city and who were here first,” said Jean-Sébastien Boudreault, vice president of Pride Montreal.

“It was something we had to do. We have to remember who was here first and that they were forced to give away their land, especially when you’re celebrating an anniversary like this in Montreal.” Sunday afternoon’s parade brought the 11-day Pride festivities to an end with over 7,000 participants marching down Rene-Levesque from the corner of Drummond to the Gay Village.

“For me, it was important to participate to represent and honour all of the Two Spirited, LGBT+ people who are Indigenous and who might be afraid to show up to a parade like that,” said Mohawk Council of Kahnawake chief Kahsennenhawe Sky-Deer, who carried a Haudenosaunee Confederacy flag throughout the parade. Sky-Deer came out during a candidate’s night when she first ran for election in 2009. She said she hopes to be a role model for others in the community.

“I’m not afraid to be who I am and I hope that sets an example for other people,” said Sky-Deer.

“I want to be a role model for other youth that might be out there that feel like there’s still a stigma. We need positive role models that aren’t afraid to be on a political stage or out there and being proud of who they are.”

The contingent also included around 50 Indigenous people from across the province, as well as the Red Tail drum group, dancers, and staff from Quebec Native Women (QNW) and Native Montreal.

“It was an amazing opportunity to be able to honour our Two-Spirit brothers and sisters, and to support my loved ones in my family who are also Two-Spirited,” said dancer Don Barnaby. For Jennifer Brazeau, the bullying prevention project coordinator at QNW, participating was about celebrating community.

“Most of the participants who were there, it was their first time ever being at a parade, the first time marching in a parade, and the fact that they were able to lead a parade was really great,” she said.

In addition to participating in the parade, QNW organized a community breakfast earlier that morning at Native Montreal’s office.

“We’re trying to make sure that members of the community feel that they’re supported, cared for, a part of us, and we’re able to advocate for them on issues that they feel is important,” said Brazeau.