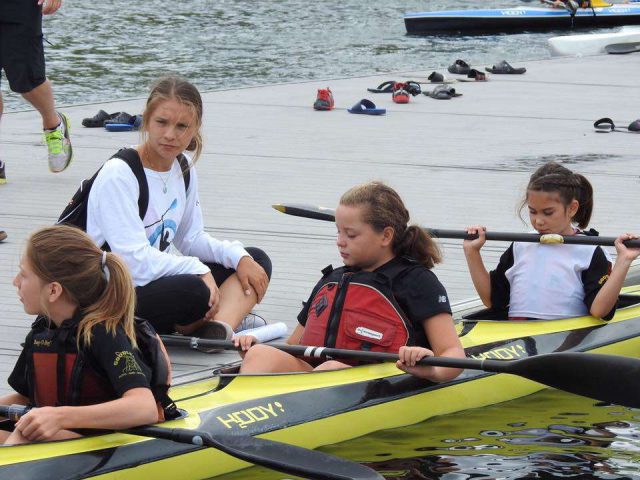 By: Joseph Coppolino, The Eastern Door

The Onake Paddling Club put forward another worthy performance at the Sprint Canoe-Kayak Provincial Championships this past week, with a number of finishes in the B and C finals.

The Sprint Canoe Kayak Provincial Championships took place last weekend at Parc Jean Drapeau’s Olympic Basin as paddlers from all across the province competed for individual and club rankings just ahead of nationals later in the week.

Coming off their impressive appearance at the North American Indigenous Games where they came away with 34 medals, half the medals for all of Team Eastern Door and the North, the Onake paddlers continued their success out on the water in a tough provincial field.

“It was a rainy start on Saturday but everyone kept racing anyway. We were well prepared,” said Onake coach Maris Jacobs. “A lot of our athletes were first timers so they did really well.”

Despite a number of strong individual showings, Onake finished in last place behind Cartierville and Sherbrooke.

Jacobs remained positive and impressed about the team’s effort despite their low finish in the rankings.

While the team did not make the A finals to come away with hardware, their collective resolve was impressive against some of the provinces most experienced and determined athletes.

“It was their first time going up against girls really putting up a fight in the race but they made a B and C final and did really well in those,” said Jacobs. “I can see that they are working hard.”

Gracie Diabo, a second year racer who placed third in her U15 K1 500 metre C finals, was also pretty impressed with how the team managed, but is looking to improve her own performance the next time she’s out on the water.

“I think how we trained showed off at provincials because it was the younger kids’ first year and they are still getting used to the sport, so I think they did well,” said Diabo. “But for me I think I did well based on my training this year, but next year I hope I do a lot better.”

For Diabo, the provincials were a tremendous learning opportunity proving to her that she has to train harder and get more comfortable on her kayak if she wants to do better against the more experienced racers in the upcoming season.

But with the season pretty much over, Diabo is looking forward to getting back to playing other sports and training to stay up top of her fitness in preparation for next year’s provincial competition.

The team’s hard work at the provincials continued into nationals on Tuesday and Wednesday where Konwenekeren Diabo went on to compete against Canada’s top paddlers in Welland, Ontario (see story on page 22).