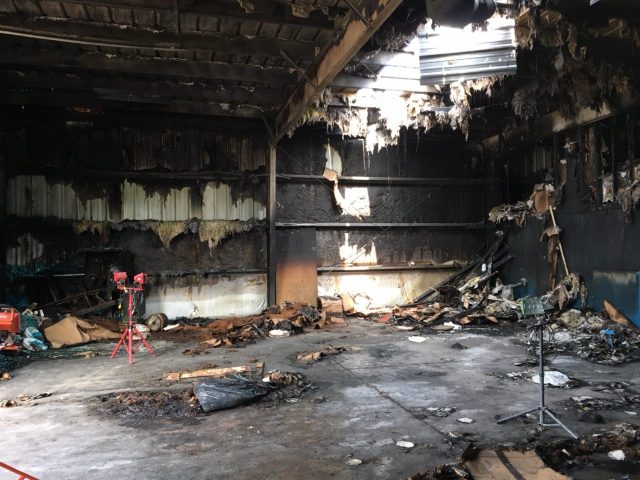 The interior of Rainbow Tobacco’s cigarette factory was destroyed in a suspicious fire on August 13. (Courtesy Kameron Lahache)

A fire that’s been ruled suspicious in the wee hours of last Sunday morning raged through the Rainbow Tobacco operation, and caused the proprietor to close the business for more than a week.

Rainbow owner Robbie Dickson heard there was a fire at his cigarette factory at 12:30 a.m. Sunday morning.

“I didn’t let emotions control me,” said Dickson. “I immediately began making an action plan to ensure the business will continue without significant delay.”

According to the Peacekeeper report, an ADT burglar alarm went off at 12:23 a.m. on August 13 at the Rainbow location on Highway 138, and investigator Jimmy Jacco responded to the call.

While on route, Jacco was notified that there was smoke coming out of the building and he paged the Kahnawake Fire Brigade.

The KFB responded to the fire, which was at the back of the building.

“We got the call at 12:29 a.m., and our officer in charge responded,” said KFB captain Wihse Stacey. “We found at the rear of the building heavy smoke and flames showing. Once they arrived, they immediately made the decision that they were going to attack the fire aggressively.”

As Rainbow Tobacco is not near any fire hydrants, outside departments were contacted to assist.

Stacey said around 40 people were on the scene putting the blaze out.

“It wasn’t that the fire was that big, it was just that it was like 1000 percent humidity and pretty hot,” he said. “It was more to make sure that our crews stay fresh.”

There were heavy flames in the interior burning the contents of the cigarette factory.

The fire burned for around two-and-a-half hours, consuming the majority of the burnable material inside.

“We had the fire under control by approximately 3 a.m., and we declared it out by 6:30,” said Stacey.

The highway was reopened at 5:48 a.m. and PKs seized items that may have been used to start the fire from the scene.

Investigators are going over surveillance video to find any potential suspects.

The KFB would not go as far as confirming that it was arson.

“I can’t tell you for sure, but I can say that it is suspicious,” said Stacey.

Dickson said Rainbow Tobacco reopened Wednesday, and was not ready to make a comment when asked if he was concerned as a local businessman at the trend of fires that have happened in Kahnawake this year, including the major fire that devastated Plaza 138 in January.

“As for now, my primary concern is making sure Rainbow Tobacco maintains a satisfactory level of operation,” he said. “Thank you to all of our loyal customers and to everyone who has reached out to offer their help in any way.”