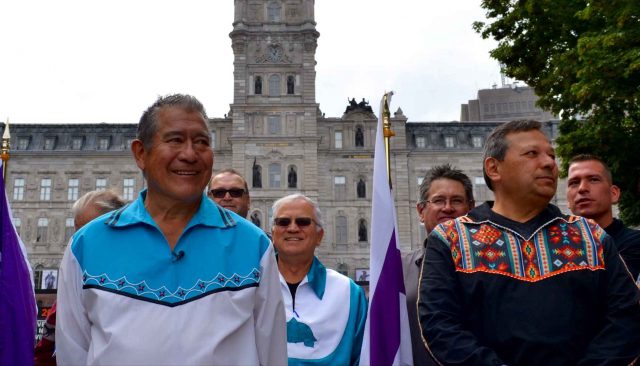 Mohawk Council of Kahnawake grand chief Joe Norton spoke in front the National Assembly in Quebec City on Tuesday afternoon to send a strong message to the province about council’s displeasure with Bill 85. (Ambre Giovanni, The Eastern Door)

At issue is a bill they feel proves the province’s unwillingness to work with Onkwehón:we communities and peoples on projects that directly affect them.

Hearings on Bill 85, An Act to establish two logistics hubs and an economic development corridor along Autoroute 30 and develop the industrial port zones in the Montreal metropolitan area, began this week at Quebec’s National Assembly.

Eleven of 12 council chiefs, along with several concerned community members, took a bus trip to Quebec to voice their frustration with Quebec over the bill that is aimed at development along Highway 30, which runs straight through the Seigneury of Sault St. Louis, which is subject of a longstanding land grievance between Kahnawake and Canada.

(MCK chief Christine Zachary Deom was unable to attend due to health issues).

“It’s certainly a prime example of where this government is going in terms of its relationship with First Nations people,” said Picard.

“It really demonstrates the hardships that we have with this government in terms of lands and resources. Everything that has to do with those two issues, they sort of find a way to side track everyone and try to remove themselves from any kind of obligation.”
At hearings this week, municipalities, the MCK and other stakeholders were given an opportunity to give testimony on the bill that is being fast-tracked to be adopted by the end of the year.

Norton explained that the MCK was not invited to the hearings this week, and only found out last minute. Council presented last Tuesday, and were upset to hear MNA Martin Coiteux, the minister responsible for Bill 85, suggest there was no link between the proposed legislation and the SSSL grievance.

“The very land that they’re purporting to divide up among themselves to create this economic zone for logistics purposes, for maritime projects, for all kinds of activities, is our territory,” said Norton. “We’ve been fighting and struggling for 400 years on that particular territory.”

Chateauguay MNA Pierre Moreau sponsored the bill, and his office responded to the hearings and Kahnawake’s complaints in an email to The Eastern Door.

“We strongly believe that Bill 85 will provide stable and long term economic growth to the region, this includes Kahnawake,” read the email from Jean-Felix Levesque from Moreau’s office. “It will create new jobs and new opportunities for everyone.”

Norton said the bill’s creation is what happens when there is “racism, ignorance, and no understanding of the people that live beside you.”

“That happened in Oka in 1990,” he added. “While we’re sitting with the federal government discussing our rights to that land (the seigneury), the provincial government decides that they’re going to divide it up amongst themselves. It’s illegal.”

Norton added that there could be harsh consequences if the situation does not change.

“We have things that we can do that could make it very difficult for anybody to trample on our rights and do what they want to do,” said Norton.

Lloyd Phillips held the Quebec portfolio on council in 2008, and now works on the MCK’s political team. He was in Quebec Tuesday and is disappointed that the initial positive vibes coming out of Liberal premier Philippe Couillard’s government towards First Nations when elected in 2013 have soured severely.

“Since that time, not only for Kahnawake, but all First Nations in Quebec have been feeling the disregard for our rights in terms of our territories or resources or actual jurisdictional disputes,” said Phillips. “The frustration is great for all First Nations… How we got from optimism to frustration is total inaction by the provincial government to take this seriously when it comes to First Nations rights.”

Phillips recalls the original land transfer discussions in 2008 that resulted in the 2013 decree to return 700 acres of territory to Kahnawake, including 500 running along the north side of Highway 30.

Since then, discussions with Moreau’s office have dried up, which Phillips finds concerning.

“I’m very surprised by his inaction,” said Phillips adding that calls and emails requesting a meeting with the minister face-to-face went unanswered. “He went silent. Numerous letters and requests went back and forth and for whatever reason, he refused to meet with representatives from Kahnawake.”

For Picard, Bill 85 is proof of the need for Onkwehón:we and other communities to keep an eye on the goings on in Quebec City.

“To me this issue here proves that remaining vigilant is something that cannot be avoided,” said Picard. “It has to be that way, and it’s really in their court now to demonstrate that we’ve been wrong all this time.”

Kahnawake has an advantage in it’s ability to challenge Quebec, and Picard knows that some communities do not have the resources Kahnawake does.

With the political climate heating up and election season looming, Bill 85’s significance becomes all the more apparent.

“It’s very important because it really reflects on the kind of difficulties we’ve been facing with this government.” said Picard. “We’re trying to find a way to engage because we’ll soon be a year away from an election and lands and resources will be key in terms of how we relate with this government.”