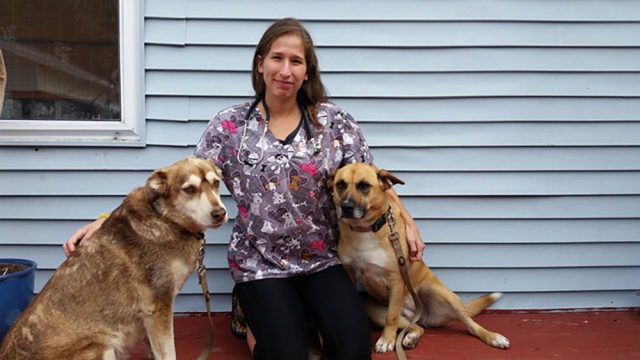 “It’s something to think about but it’s not dampening my plans to become a vet,” Montana Diabo said of the cost of veterinary school.  High price tag won’t keep Diabo from her dream. (Courtesy Montana Diabo)

By: Darya Marchenkova, The Eastern Door

Montana Diabo has launched an online fundraising campaign to raise $85,000, about a third of what she says she’ll need to get a veterinary degree at a university in the Caribbean.

Diabo plans to start at Ross University on St. Kitts island in January 2018. Her GoFundMe campaign says she’ll need a total of $250,000 to finish the program. Diabo launched the campaign on August 3 and has since raised $2,150 from 13 donors.

The Kahnawake Education Center has offered her $2,500 per semester.

“What they do offer at the Kahnawake Education Center is kind of like peanuts to what I need for tuition. And plus with the exchange rate, it’s going to be going to US dollars, so the money I’d be getting from here would even be less,” Diabo said.

The Kahnawake Education Center offers a standard amount of funding for students attending CEGEPs and universities. The amount offered does not change according to whether the university is in Quebec, Canada or abroad.

“We encourage students to apply to local CEGEPs and universities for their education, as going out of province or internationally will incur additional costs to the client we cannot fund,” staff, including Chris Leclaire, post secondary counsellor of the Kahnawake Education Center, wrote in an email to The Eastern Door.

The Education Center gets its funding from Indigenous Affairs and the funding “never meets demand.”

She wants to do her veterinary program in English, which means she has to leave Quebec, where there is one veterinary school – at the Université de Montréal.

There are five veterinary schools in Canada. To apply to any one of them, applicants must be residents of either the province or region where the school is located. An applicant can become a resident by living in the province for a year without going to school.

“It didn’t leave me with any options, so I kind of have to look abroad,” Diabo said.

Diabo plans to open her own practice in Kahnawake. To practice in Quebec, she will eventually need to complete the exam to get her veterinary license in French.

Her GoFundMe page describes her academic achievements and the programs she’s helped start and run in Kahnawake, including spay-neuter and microchip clinics.

Diabo has three classes to finish before completing a biology degree at Concordia University. Now she’s considering putting her studies at Concordia on hold to spend the fall working and earning money before her move to St. Kitts.

Ross University does not require students to complete their bachelor’s degrees to begin at their veterinary school.

Diabo plans to move to St. Kitts to start school in January 2018, regardless of whether she raises enough money to cover the costs. She says she’ll take out student loans to cover whatever she doesn’t raise.

The crowdfunding campaign is the latest in her and her family’s fundraising efforts.

“Beforehand, my mom was like a superstar. She helped me. We did mini lottos, and Super Bowl squares, and a golf fundraiser. Everyone in the community is super connected and we know everyone, and you’re always supporting each other,” Diabo said.

Then a friend suggested she try an online fundraiser.

“It’s not going to stop me,” Diabo said of the costs. “It’s something I’ve wanted forever. Sure, I’ll be in debt for a while, but I’ll eventually get out of it.”