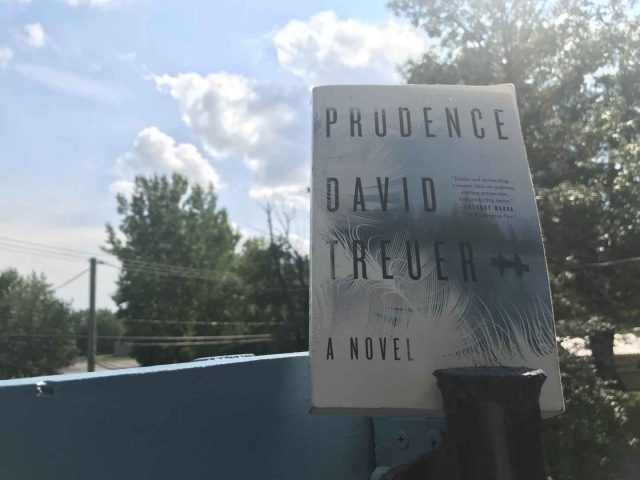 Prudence grabs you with its first pages and does not let up to the final tragic words  David Treuer is an author one would be wise to check out.

Sit down for a minute or two with David Treuer’s book Prudence (Penguin/Random House; $21), and those minutes may turn into an hour or so.

The Blue Metropolis Fires Peoples Literary Prize winner’s novel published in 2015 is a powerful, heartbreaking and unique story told from multiple viewpoints that are all engaging and make the plot flow through themes of hope and despair like the river that runs through the pines.

The Eastern Door interviewed Treuer at the Blue Met festival and the author said he found pleasure in writing literature vested in the specifics of where he comes from.

Treuer, from the Leech Lake Ojibwe reservation in northern Minnesota, takes readers in Prudence to the pines, and guides them through the territory woven in each character’s traumas and reflections.

Local readers will relate to its locale and the issues the characters battle with.

Everyone tells a piece of the story such as the closeted best friends Billy and Frankie, whose love and lives are forever altered by a fatal accident. Frankie’s busybody mother gets a chapter, as does the stoic and dependable Felix, always near and active and functioning something as a guide to the younger people.

At the centre is Prudence, a runaway longing for a lost sister, and spiraling into despair and loneliness.

The world is not all bleak and lonely as there is true beauty and companionship swapped between characters, and the world is alive and vibrant.

Treuer said when he was in Montreal that he was surprised to learn a prisoner of war camp was erected on his reservation during the Second World War and housed captured German soldiers. He said he found it interesting, and wanted to include that fact in his story.

The result is a landscape that is yes, on reservation, but also includes this most foreign of foreign structures the characters are fascinated by, and fear at the same time.

The story never sways too far in any one direction, making it a success of realism. Treuer is able to show you their lives without telling.

Consider the delicacy and craftsmanship of the following quote:

“The woodworker took tobacco and money and did whatever was asked of him, more patient and cunning with the wood than hunters on the game trail.

“As a child, Felix had been convinced that he used some kind of magic. At seventeen, Felix had asked him to make a cradleboard for his own baby, due in a matter of months.

“Too soon,” said the woodworker, “you’re asking too soon. Wait till the baby comes.” But Felix was greener than the wood itself and the baby wouldn’t be there until after he and his brothers walked north across the border and joined the Canadian army, and so he had to ask, even though he knew better.

“In 1919 Felix burned the cradleboard along with the rest of his wife’s and child’s things. The woodworker had been right.”

If you haven’t had a chance to dive into one of Treuer’s books, start with Prudence.