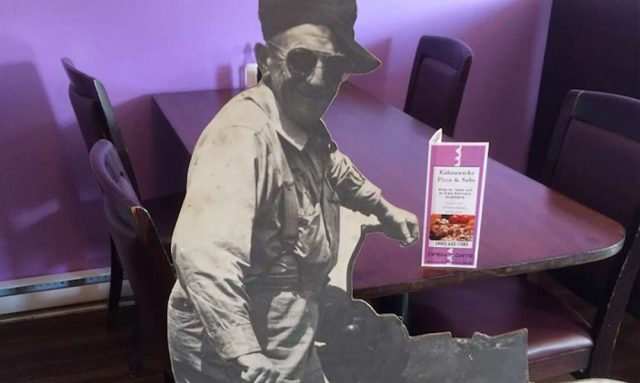 Can you identify the cardboard cutout of this unknown riveter taken sometime in the 40s? (Peter Phillips, The Eastern Door)

This week’s Blast from the Past is unique in the sense that it comes in the form of a cardboard cutout of an ironworker, as seen above.

As with many of these types of stories, there is a great deal of ambiguity but here is what is known:

Katherine Charles discovered it while she was cleaning a shed about a month ago, behind Kahnawake Pizza and Subs, though she has no clue where it came from. So there is a mystery, but one can still ponder on what little evidence there is.

“My brother-in-law tore down the shed in the back. The only background information I can give you is that people thought it was my late dad,” said Charles, although she says it couldn’t be her father, the late John Charles.

“Back in the 40s my father was working in Del Rio, Texas, so I don’t know if maybe he was working with this man,” she said.

It could even be possible that her father was the person taking the photo itself. Perhaps the mystery man will remain unknown.

“He is too short, not dark enough and he’s too heavyset to be my dad,” she said.

There were some elders who stopped by to see if they could ID the man or provide any other information about the photo.

The fact that many of the older generations of community members have died makes it even harder to find out exactly who it is and where they are in the photo.

She hopes that by putting the photo in The Eastern Door, one of our readers will come forward to talk about it.

There is some residue on the back, which shows either tape or glue, so the previous owner would have had it hanging on the wall.

In the background is a train bridge, so the man in the photo is likely working on one or maybe next to one.

To the left, if one focuses, they can see the railway tracks and on the far right, what appears to be a passing freight train. On the right is another worker.

“As you can see, this man here, he’s connecting or he’s bolting up, he’s got his hard hat on,” she said.

There is also another man on the right, though only about half of him from the waist down can be seen and it is unknown as to what he is doing. He does appear to be wearing a buttoned shirt so perhaps he is a boss of some sort.

The object his right hand is leaning on is a rivet gun, though some have mistaken it to be a can. The machine below his left hand is a rivet heater.

“If you notice the boots, its not your Redwing work boots. He’s also got suspenders on,” she said.

The man is also smiling, wearing sunglasses and a large ball cap.

On the left there seem to be work trailers in the background, likely part of the jobsite.

“When people come in I bring it out and it’s a topic of conversation,” she said.