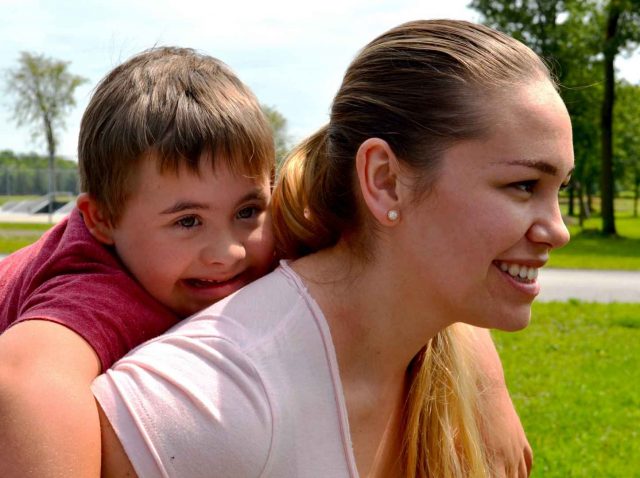 Kahente McGregor is all smiles now that her son Madden is cancer-free for two years. (Ambre Giovanni, The Eastern Door)

Madden Diabo may have been too young to understand what was happening to him, but his parents Kahente McGregor and Brody Diabo are happy to see light at the end of a dark tunnel.

Little Madden, who was born with Down Syndrome, has been in cancer remission for the past two years.

“Medically, everything is in the clear,” said Kahente. “The doctors are very impressed, he’s growing and he’s thriving.”

Madden was diagnosed with leukemia, a cancer of blood-forming tissues, in early January 2013 when he was just two-and-a-half years old.

“He was sick for months, all the time – going to the hospital, antibiotics and they couldn’t figure out what was going on. It just never went away. Finally, we went to the Children’s because something was really wrong,” said Kahente.

In March of 2015, the couple received news from Maddens’ doctor that he would be done chemotherapy that June.

“Since then, he’s been really good. He’ll go to the hospital every three weeks for basic routine, blood tests, height, weight and all that to make sure that everything is good and that he doesn’t relapse,” said Kahente.

Madden, now seven, will be starting grade one at Kateri School this fall.

“Everything was basically put on hold. He was at Step by Step at that time and wasn’t able to go to school all that time. I think he’s kind of made up for everything that he missed,” said Kahente.

“With his Down Syndrome and everything, Kateri School has been really supportive and providing him an occupational therapist,” she said. “With the whole community’s support and accepting of him, that’s important to Kahente, and one of the challenges that come up with that is she needs the support from the community – and people do help in many ways.”

Since Madden was diagnosed, the family received a monumental amount of support from the community to help alleviate the financial burden.

A number of fundraisers have been held raising money for gas, parking, food and other necessities for the family, including poker tournaments, breakfast fundraisers, bake sales, and his fellow classmates at Step by Step Child and Family Center even raised money for him and his family by selling fresh lemonade in 2013.

Madden even had the opportunity to drop the puck at a Boston Bruins alumni game, and his older sister Tiawehtahkhwa also chopped off her long hair to donate to Locks of Love and to show her support to cancer patients.

“The generosity of the community when they come together to help one another – all these people who come from everywhere and we don’t know who they are – but being anywhere in the community they’ll say ‘oh, hi Madden!’ like he’s a celebrity,” said Colleen.