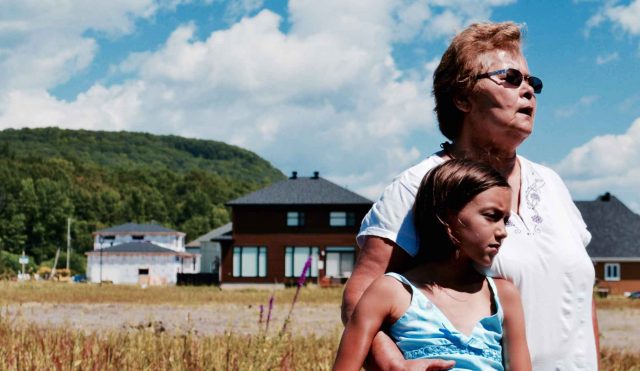 As Kanehsata’kehró:non rolled in on Tuesday morning at a disputed site just outside the Village of Oka, they noticed the new street names and stop signs.

So they decided to erect some of their own.

“Saviez-vous que c’est une terre contestée?” read one, while another simple read “Homeland security,” as the men nailed them to telephone poles.

With the Surete du Quebec’s liaison officer to Kanesatake sitting close by in his vehicle, Ellen Gabriel once again read a statement opposing any development on Mohawk Territory.

“Canada has historically had unclean hands,” Gabriel read. “This dispute could have been averted back in 1990 if Canada had acted honourably and respected the recommendation of former minister of Indian Affairs for Quebec, John Ciaccia, to revert all the disputed land back to the original owners, the Kanien’kehá:ka Nation in Kanehsatà:ke.” “We are here today to reiterate our opposition to the ‘Plan d’Urbanization” by the Municipalité d’Oka and the continued sale of Kanien’kehá:ka traditional lands in Kanehsatà:ke, known as Oka,” she read.

The site, at the end of Champlain and Verger streets, is called the Collines d’Oka, and there continues to be movement by developer Gregoire Gollin, in spite of the protestors’ objections to halt all development there, to add to pine trees previously cut after they were supposed to be spared.

“We also want to reiterate our message to the public and the residents of the homes on these disputed lands that we do not intend to take away anyone’s home nor ask for their keys,” the statement says.

“We respect their rights to have peace and security for their families lives. We ask that the same respect be given to the Kanien’kehá:ka peoples of Kanehsatà:ke.”

Later, Gabriel was asked a few questions by The Eastern Door.

“This coming Saturday, August 12 (tomorrow), we’re going to be having a march from Oka Park because that is also another disputed land area. Presently, Archeo-Quebec and the government of Quebec has issued permits for archeologists to take more of our cultural heritage from the park, and they allowed the public to come in and dig, so we also demand that this also be addressed as part of the disputes we have with the colonizer and Canada,” said Gabriel, with the march eventually slated to end up at the disputed site.

Those present had a message to Oka mayor Pascal Quevillon, Ottawa and Quebec, a peaceful one with hopes of getting across the same point from the last 27 years: give the land back to the community immediately and stop ignoring the people.

“We hope the Canadian public will put pressure on the government of Canada and Quebec, and the municipality of Oka to resolves this issue and sit down with the legitimate rights holders…in resolving this 300-year old land dispute,” said Gabriel.

“This is not conducive to reconciliation as prime minister Justin Trudeau has stated,” said Gabriel, adding Quebec has to join Canada in implementing the United Nations Declaration of the Rights of Indigenous Peoples.

The new street signs were erected “without our free, prior and informed consent,” said Gabriel, adding the land protectors would no longer tolerate illegal activity on Mohawk land.

“I find this as an act of provocation on his (Quevillon) part, disregarding and disrespecting the Kanien’kehá:ka peoples – the legitimate landholders to this piece of land,” she said. The grassroots movement of the traditional longhouse people and supporters is gaining momentum across the country, as more people become aware of what’s going on.

A statement was released this week from the 207 Longhouse in Kahnawake in support of the fight:

“Our Longhouse proclaims its support for our brothers and sisters at Kanehsatà:ke who have taken action to ensure that the town of Oka does not encroach any further upon unceded traditional Kanien’kehá:ka territory,” reads the statement, signed by Mohawk Nation at Kahnawake secretary Kenneth Deer.

“Oka Mayor Pascal Quevillon should have had the foresight to avoid a potential dispute with the people of Kanehsatà:ke by not allowing the construction of a housing development on disputed lands.

“Regardless of whatever agreement was made between the Mohawk Council of Kanehsatà:ke (Indian Act Council) and the town of Oka, the Kanien’kehá:ka Nation at Kahnawà:ke supports the authority of the Kanehsatà:ke Longhouse as the proper stewards of Haudenosaunee sovereignty for the territory of Kanehsatà:ke,” the statement reads.

Rumours have been circulating about secret meetings between Quevillon and Serge Otsi Simon, grand chief of the Mohawk Council of Kanesatake, but Simon did not return calls this week.

The Eastern Door did get in touch with other MCK chiefs, however.

“I did hear of an offer the landowner stated but it was a donation and unofficial, we heard it from a third party at the Quebec liaison level, Marc Foisy,” said MCK chief Patricia Meilleur. “We are supposed to schedule a meeting and it hasn’t happened yet.

“Pascal is campaigning for re-election right now and you need to watch the broken promises or statements he is making. He takes credit whenever it suits him best. He never wrote or made any offers to MCK,” she said.

The federal government put compensation on the table for the land, according to Quevillon.

“They said they had received the offer and were analyzing it,” he said about the Mohawk Council. “It was filed with the Mohawk Council on June 30 by the federal government, the office of Indigenous Affairs Canada.”

Simon told the community in a mid-July meeting an offer from the feds was received, but he couldn’t give details and admitted it “wasn’t a good one.”

Victor Bonspille, who was re-elected for a second term as MCK chief this summer, plans on going to Saturday’s march.

“All I have to say is we need to be united on this issue, not divided,” he said. “I’ll be going as a supportive community member in our ongoing fight for our lands and rights.

“We have always fought for our lands and rights and our resilience is never ending as Mohawk people.”