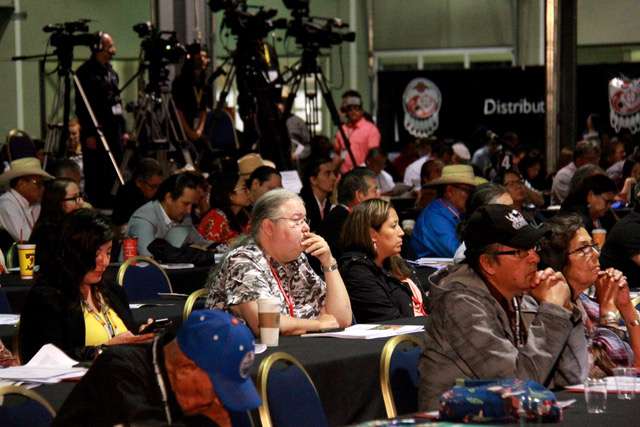 By: Russell Diabo, Special to The Eastern Door

During his opening speech AFN national chief Perry Bellegarde said the AFN “is not in bed with any one party.” Bellegarde pointed to the fact that the newly-elected Leader of the Conservative Party of Canada, Andrew Scheer was present at the Assembly, as were several NDP MPs.

However, the entire three-day AFN agenda was based on the 2015 Liberal promises on Indigenous Peoples’ policy. Not to mention the bevy of federal Liberal cabinet ministers who were in attendance at various points during the AFN Assembly. These are some of the heavy hitters in Trudeau’s cabinet:

Now I’m sure many readers will think that Trudeau’s campaign promises are great and it’s good that so many federal cabinet ministers came to the AFN Assembly, but two years into their mandate the Trudeau government is developing a record of saying one thing and doing another when it comes to Indigenous Peoples’ policy.

Not to mention that the Trudeau government is developing its Indigenous “Nation-to-Nation” “reconciliation framework” in secret from the top down, using the AFN.

On June 12, 2017, Bellegarde and Trudeau signed a political agreement, called a Memorandum of Understanding on Shared Priorities that, through the AFN charter structure, plugs the chiefs across Canada, including the Iroquois Caucus chiefs, into the national federally-driven process to develop/change law and policy.

The AFN Assemblies are the main decision-making body within AFN, which is why monitoring the outcomes from these assemblies is important for Haudenosaunee. The next assembly and decision point will be in December at the AFN Special Assembly in Gatineau, Quebec.

So far, the Trudeau government has operated by stealth in backrooms, they’ve established reportedly 40-50 “exploratory tables” to discuss “Nation-to-Nation” issues, but they’ve refused to say who they are talking to and what the issues under discussion are, but these secret discussions are intended to feed into a “Ministerial Working-Group on Law and Policy Affecting Indigenous Peoples” to “decolonize” Canada’s laws and policies.

This “Working-Group is made up of six federal ministers and it is led by Wilson-Raybould, again the real work will be behind closed doors protected by cabinet secrecy.

The same is true for the “Bilateral Mechanism”—an AFN-Federal Cabinet Committee that will meet once a year with national chief Bellegarde and prime minister Trudeau. In addition, there will be a couple of meetings annually between federal Ministers and the AFN.

One of the biggest promises the Liberal Party of Canada made in 2015 was that a Liberal government would endorse and implement the United Nations Declaration on the Rights of Indigenous Peoples’ (UNDRIP).

The Trudeau government is doing everything it can to convince Indigenous Peoples and the Canadian public that UNDRIP can be implemented through Canada’s existing 150-year-old constitutional framework, which is what Jody Wilson-Raybould says her recently released “10 Principles” on relationships with Indigenous Peoples were developed for, to guide the federal law and policy review process.

“Our prime minister formed a working group of federal ministers to review laws, policies, and operational practices to ensure that the Government of Canada is fulfilling its constitutional obligations and implementing its international human rights commitments, including the UN Declaration.”

Article 26 of UNDRIP provides that:

“Indigenous peoples have the right to the lands, territories and resources which they have traditionally owned, occupied or otherwise used or acquired.”

Meanwhile, most of the AFN Assembly agenda and draft resolutions from chiefs focused on Indian Act dependency programs NOT Indigenous Peoples’ right of self-determination or taking on the provinces for a return of stolen land, territories or resources.

The AFN Assembly in Regina shows me that Ottawa, through the AFN-Canada MOU, remains firmly in charge of the funding, process and agenda of the majority of Indian Act chiefs across Canada.

I’ve also got to give credit to the Trudeau government for its masterful public relations approach to Indigenous policy issues; they’re really good at rebranding and selling termination as reconciliation!