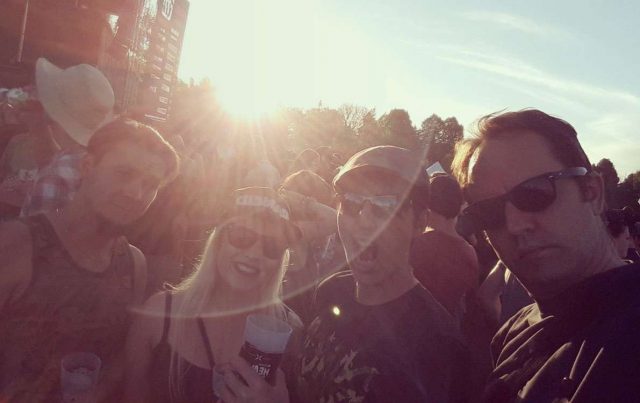 Eastern Door reporters Jessica Deer and Daniel J. Rowe did not really blend in with the denim vest-wearing and mohawk-sporting sea of crusties both young and old that came out to Parc Jean-Drapeau on Friday. (Daniel J. Rowe, The Eastern Door)

As I watched X take over one of the stages at the ’77 Montreal festival last Friday, all I could think of was, wow, Exene Cervenka looks incredibly withered – but still incredibly badass.

The 61-year-old vocalist to the California punk band was just one of the handful of sets as part of the inaugural day-long festival co-organized by concert promoters Greenland and Evenko to celebrate 40 years of punk.

Dropkick Murphys and Rancid co-headlined, while the day also included sets from the Vandals, Bouncing Souls and The Creepshow – making it a great replacement for the postponed Heavy Montreal and well, the lack of Van’s Warped Tour.

I, like many Kahnawa’kehró:non, am a fan of Heavy Montreal and was pretty bummed when Evenko announced that it would only be taking place next summer.

Even when I’m not totally ecstatic about the lineup, there’s just something about the atmosphere of thousands of metal heads, tattooed chicks, and sweaty drunk dudes in black tees and camo shorts gathering under the sun for their annual dose of noise.

Metallica’s concert two weeks ago was kind of like that, but attending the show really hurt my wallet from the ticket price, and well, my feet from the 2.5 KM walk to the site. Friday’s ’77 Montreal was, thankfully, not as far to walk and ticket prices were way more affordable, but as with all Evenko events… the beer was not, nor was the wine.

Who buys a $9 glass of red of wine at a punk show? Eastern Door reporter Daniel J. Rowe – that’s who. When I asked him what he thought of the show, he just rambled off about how the promotions were a constant reminder of how old he is.

“There’s something surreal about going to a concert that literally reminds you of your age constantly. Hey. ‘77. That’s when I was… Oh man. Those guys on stage look older than me,” he said.

“There is also something satisfying about being able to cockily say over and over that I saw them 20 years ago back when we bought CDs and immersed ourselves in the entire album, while wearing a concert shirt from my wife’s band knowing that you remembered where you were when Cobain died.”

Yeah, well, I was illegally downloading Rancid at 14 years old in my mom’s basement over dial-up Internet. That’s pretty punk, no?

I attended Friday’s show with my old as punk co-worker, and two friends: Dennen and Colton. Dennen said he was “pretty pumped” about going to the concert.

“Out of all the music festivals and concerts that were taking place this summer, it was Festival ’77 that I was for sure not missing out on,” he said.

“Dropkick and Rancid were awesome as expected. I’m a huge Dropkick fan, especially of their older material. They played a medley of songs from their first album that I just sang my heart and lungs out to. It’s always good times and great memories when The Gang’s All Here in MTL.”

It was my first time seeing Rancid, and I have to agree they were awesome! However, one thing is for sure, if you go see them during an outdoor concert on a hot summer day, you’ll probably wake up the next morning smelling awfully rancid.