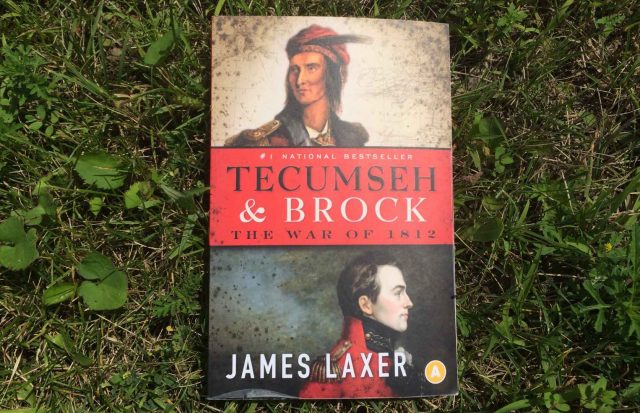 The last major war fought on Canadian soil which featured a rare moment of unity among indigenous peoples, a British empire determined to keep its foothold in Canada and a rising new American power. (Peter Phillips, The Eastern Door)

Tecumseh and Brock: the War of 1812, is a great read for anyone who wants an introduction to the final major confrontation involving the British, the Americans and the First Nations.

“Tecumseh and Brock understood each other. Together, they could do what neither could do alone,” Laxer wrote.

The book begins with an introduction to the war and its legacy, which can be very different depending on whether the viewpoint is from the Americans, Canadians or First Nations.

Laxer is a left-leaning Canadian historian so his book focuses more on the First Nations and battles fought in Canada.

Outside of North America, the War of 1812 isn’t discussed very often as it was overshadowed by the wars of Napoleon Bonaparte in Europe.

“In what the French and the British regarded as the lesser theatre of war, in North America, a showdown took shape that was intimately connected to the one in Europe,” said Laxer, as he reminds the reader that history is also affected by who is studying it.

Tecumseh was a Shawnee chief from what is now Ohio, who rallied a polyglot confederacy of Indigenous peoples into war against American settlers intent on settling the west.

He was one of those rare figures with the ability to unify those who are usually hopelessly lost to inner-conflict. He also understood the practicality of an alliance with the British.

“For nearly three decades, Tecumseh served his apprenticeship. He learned the skills of the warrior, acquired the responsibilities of the chief, and knew the strategic lay of the land for the Shawnee and other native peoples.”

Isaac Brock is praised similarly, a veteran of the Napoleonic Wars he was an excellent commander for the defense of Canada.

“Brock did his duty in the colony, all the while longing for the day when he would be transferred from a backwoods corner of the imperial realm to participate in the ‘big show’ in Europe against Napoleon.”

Laxer argues that it was the difficult alliance between Tecumseh’s confederacy and the British Empire, which prevented a successful American invasion of Canada.

“What distinguished Brock from the other leading British commanders in Lower and Upper Canada was that he understood the imperative of sustaining an alliance with the native peoples.”

That is one of the reasons why the war is often forgotten, only revived when a historian or pundit needs to cite the last time the United States was invaded by a foreign power.

Today, Canada, the United States and the United Kingdom are good neighbours and allies to one another so it is hard to imagine that there was a war among them.

Brock had a difficult time getting the Iroquois to join him in the war. At the beginning of the conflict, many Iroquois tried to stay neutral or silently support the Americans.

This was especially true when Iroquois from New York State tried to get Iroquois in Ontario to reject a British alliance.

“Those who favored neutrality left the meeting, allowing the pro-British Mohawks to prevail. It was from the pro-British elements that Brock drew his present complement of warriors.”

Despite internal divisions, the Mohawks fought with Major General Brock and helped repulse an American invasion at the Battle of Queenstown Heights.

While Brock was killed in the battle, the Mohawks continued to assist the British throughout the war.

This book was a lot of fun to read for both casual readers and historians while reinforcing a Canadian and Indigenous perspective of one of the last major wars fought in North America.