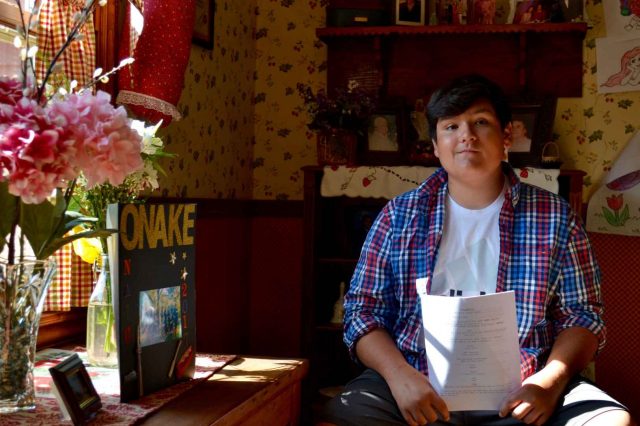 Jarrett Teiotsi’tsathe Jacobs’ work will make its grand debut at tonight’s Eastern Connection Film Festival at the Host. He is among the half-dozen talented local filmmakers and writers who will feature work. (Ambre Giovanni, The Eastern Door)

An homage to Italian horror, a first-person journey from the mind of Tharonhianén:te Barnes, a documentary on Kanien’kéha survival, and a live reading of an up-and-coming talent for words and story.

It must be time for the sixth annual Eastern Connection Film Festival.

It’s tonight at the Host Hotel at 7 p.m.

“It will be the first film of mine where viewers will see through the eyes of the protagonist,” said Barnes of his film 3AM. “I wanted to experiment with a first-person perspective for portions of the film, and so I designed the soundscape to be very diegetic.”

Don’t worry. We had to look it up too.

“3AM is a new beginning for me,” said Barnes. “While there are small Easter eggs that pay homage to my previous films, I wanted my sixth year at the ECFF to begin a new era.”

Another regular at the festival, Horne is back after taking a year off, and is excited with his contribution, Otsì:nekwar (yellow), this year.

“It’s an homage to the Italian horror films of the late 60s/early 70s,” he said. “I’m very happy to say we did everything ourselves, from filming to editing to sound design to lighting.”

Gage K. Diabo again collaborated with Horne this year, providing the score for Horne’s film and will also be one of the readers premiering a script by former Eastern Door beat reporter Jarrett Jacobs.

Horne and Jacobs had planned to shoot the script, but were unable to organize a proper shoot in time. Horne suggested premiering the script in another fashion.

“When he read my script, I sent it to him, he decided that it was really good, and that he didn’t want it to go to waste and be left on the side, so he suggested to Marion (Delaronde) that we read it at the festival,” said the 15-year-old. “It’s really cool. I’m really excited to read it.”

Delaronde founded the festival six years ago, and is very excited with the contributions from filmmakers she has seen grow in the past half decade.

“It is very rewarding for me and it really makes me happy,” said Delaronde. “Sometimes you see someone release a film that maybe people didn’t get it, and you want them to do well, and then, all of a sudden, they have a big breakthrough.”

Delaronde added that the filmmakers help and support each other, and promote the work, as exemplified by Horne suggesting a live reading of Jacobs’ script.

For this year’s crop of films, the early returns are positive.

“I feel like they’re really good,” said Delaronde of this year’s contributions. “People have really bumped it up a notch this year.”

Delaronde highlighted the improvement in sound, composition, lighting and other aspects of films, going so far to compare one filmmaker to Stanley Kubrick!
Kubrick!