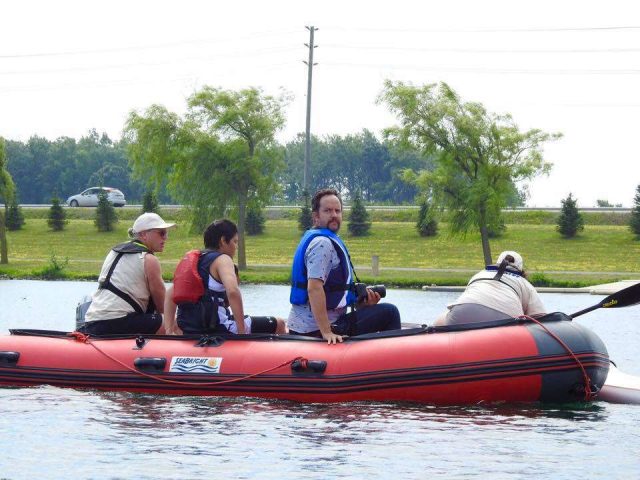 In one of the rare moments out of the car, The Eastern Door reporter takes a trip on a zodiac to catch some shots of the multi-medal-winning Onake paddling team during an exhausting week covering the NAIG. (Courtesy Sharon Rice)

So, after finding a slick apartment in the trendiest area in Toronto for the week, I thought myself set, set to cover the North American Indigenous Games.

I could, I thought, just ride my bike to the venues, take my pics, enjoy the games, and be set as a perfect volleyball pass.

This year’s games used the footprint left by the Pan Am Games two years ago giving athletes access to state-of-the-art facilities in a number of locations.

To drive from one event to another meant taking a 45 to 120-minute commute one way if, that is, the delightful GTA traffic didn’t slow you down even more.

Here’s how to do it, in this reporter’s humble opinion.

Using a week planner, each morning I wrote down which events the EDN teams were in for the day.

Every single day the events conflicted (the archery to rifle range drive is a lot further than the most well-shot arrow).

Two factors contribute to the decision: route and medal.

If the game was more or less en route to another event, good.

If the team or athlete was playing for a medal, hard yes.

It was how I hit two lacrosse games, a chat with the archery team and two more soccer games in the first day.

Below is an example of the distance one-way for each trip. Try putting these maps together.

Then this thing: get ready to drive.

…and then drive some more.

This one more goes out to those with the purse strings (i.e. the boss), but if you want to do the games correct, you’ve got to invest.

Day one, I drove over 200 kilometres, hitting a Hamilton arena, one in Six Nations then McMaster University.

The next day involved an 88-km drive to the rifle range followed by stops at the golf course and wrestling mats.

Oof. That oil change reminder sticker got left somewhere between St. Catharines and the badminton court in Scarborough.

The days are super long.

This is how you cover an event like the NAIG.

You have to go to every venue, meet as many athletes, coaches and parents as you can, and then leave to hit the next one.

It’s tiring, but worth it.

Lunch was trail mix on the road.

Dinner was trail mix and a sandwich on the road, and in between was, well, trail mix.

Sounds sad and boring, but, in fact, it was a very smart and efficient way to stay fed.

You can make it yourself by visiting a health food store and picking the mix you want.

It’s a lonely dining experience, but better than a greasy drive through burger or bag of doughnuts.

Like the athletes who won gold, you have to commit to coverage if you want to do it right.

It’ll be lonely and exhausting, but, you will, however, know that you covered as much as you could and gave a small something back to the community you serve.

That’s something, at least.