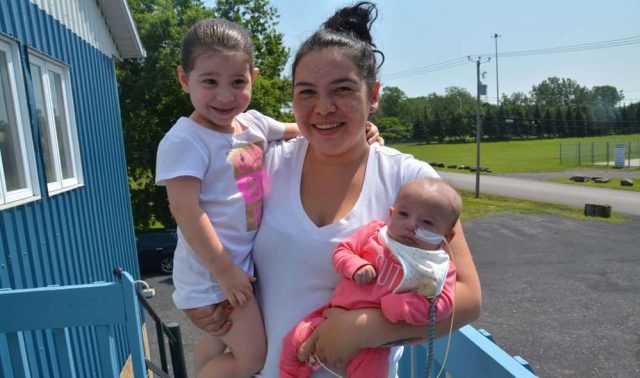 At only five months old, Isabella Fure has undergone a number of major medical procedures that most won’t endure in a lifetime.

Born on February 17 to Kahnawa’kehró:non Michaela Montour and her boyfriend Brad Fure, Isabella was diagnosed with congenital heart disease, including a double outlet right ventricle, ventricular septal defect (a hole in her heart), and pulmonary atresia.

“She’s strong. How can you go through all that and still be happy and loving?” said Michaela, who currently lives in Gatineau.

At only 12 days old, Isabella required open-heart surgery at the Children’s Hospital of Eastern Ontario to fix the pulmonary atresia, a birth defect of the pulmonary valve, which is the valve that controls blood flow from the right ventricle to the main pulmonary artery.

“Hers was blocked. When she was born there was no blood flow to her lungs,” said Michaela.

Although the surgery was a success, Isabella’s health worsened in the days following from a necrotizing inflammatory bowel condition, and required an emergency surgery that her doctors were unsure she’d survive.

“The whole time, my boyfriend couldn’t be there because he had a very bad cold. It was about seven in the morning. The surgeon explained that they were going to take her in the operating room, but we don’t know if she’s going to come back,” said Michaela.

“They said call your family and tell them to come. At that point they said Brad needs to come. It didn’t really click in what was happening, I was just so overwhelmed with everything. They asked if we wanted to get her baptized and what are plans were. That’s when I was like ‘oh my god.’”

The three-hour surgery was also a success.

“We got a call from a nurse to come back in her room and the surgeon was smiling,” said Michaela. “She had an ileostomy bag and they had to cut 20 centimetres of her bowel out.”

After eight weeks, the surgeon was able to remove the bag. Then, when Isabella turned three months old, she was discharged from the hospital, however another major heart surgery is expected in the future.

“She came a month early, and she had intrauterine growth restriction, so she was very tiny. She was only four pounds, and then she lost some,” said Michaela.

“We’re essentially just home waiting for her to grow. When she gets big enough and when the cardiologist and cardiac surgeon thinks its okay, they’ll do the next one.”

Meanwhile, Michaela and Brad’s friends and family have extended their support by starting a Facebook page, Heart Beats for Bella, and are also organizing a fundraising concert on September 8 at BLVD Bar & Grill in Chateauguay.

“We all kind of just decided that we should do something, even if we can’t fix the medical problem. But, maybe we can give them a hand financially,” said Cathy Cyr-Dade, a friend of the family.

Tickets are $10 and can be purchased through the Facebook page.

“Every cent is going to help the family. We’re hoping to raise a little bit of money that they can take off a little bit of the stress and focus on taking care of her,” said Cyr-Dade.

“We can pray for them, we can say that we’re here for you – but none of us are living what they’re living. My goal is to obviously raise them some money, but for them to know that we can’t touch her and can’t hold her, but there’s a lot of people rooting for her.”

Michaela is touched by the act of kindness.

“I’m so thankful that somebody would think of us to do that,” she said.

One of the current expenses that falls on the family is purchasing feeding tubes on a monthly basis so that Isabella can eat.

“Her heart works so hard just to be able to function to get blood flow through her body, so it makes her too tired to eat by mouth. They think after her next surgery, she’ll be able to eat, but they don’t really know for sure,” said Michaela.

“We have private insurance that will pay a portion of it back, but we have to send it to them and then it takes weeks for them to send it back to us, so it can cost about $1,100 every three to four weeks, just to be able to feed her properly.”