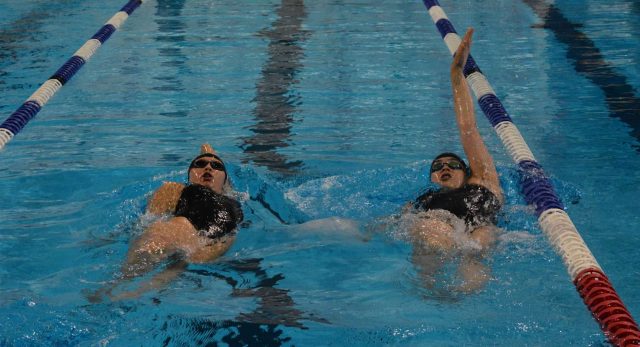 Keely Thompson-Cook and Cadence Patton may have been two of the youngest swimmers on the team, but they battled out every race and Cadence came home with a bronze medal. (Daniel J. Rowe, The Eastern Door)

At Regina’s NAIG in 2014, the Eastern Door and the North (EDN) were left with no medals in the pool. Reason being, no team.

Not so in Toronto, where the seven-team EDN team hit the water in style, and came home with 14 in total.

The medal haul is even more impressive given the young age of the swim team that will be back in style when the next NAIG rolls around.

Cadence Patton, at 13, was the youngest on the team, and won a bronze medal in the 50M backstroke on the first day, breaking onto the podium in style.

She is the daughter of Kateri School teacher Penny Berg Patton and Allan John Patton, and spoke about joining the team.

“I joined without knowing anyone, so we just were kind of on Facebook all the time communicating through there,” said Cadence, who also finished fifth twice.

“I only met all of them on Saturday when we came up. And ever since then, I’ve become really close friends with my other two teammate girls, and my coaches are very nice. It’s been a really good experience so far.”

Brothers Andrew and Peter Thais traveled to the NAIG from Long Island, New York where they live and swim competitively.

Peter won a silver in the 200M medley and bronze in the 50M and 100M backstroke.

Peter did see room for improvement from last week.

“In the 50-back I thought I could have done better because I really like backstroke, it’s my favourite stroke,” he said. “The 200IM, I hate butterfly, so I’m pretty happy with that silver.”

Though the EDN team was much smaller than some, it performed at the highest level throughout.

“My competition is really good,” she said. “Team Saskatchewan, they’re crazy (good). My team is very small, but they’re all doing really well. Yesterday (Wednesday) they got in 12 finals and we’re only seven people.”

The positive showing at the games is a credit to the individual swimmers’ work preparing for the games.

“It tells me that they’ve been preparing and conditioning since August,” said coach Melissa Oakes.

“They’ve all been training for a while and it just shows the strength in their character as far as discipline, dedication, commitment, physical ability and having the courage to perform. That’s what happened here today.”

For Patton, who will be able to compete in two more NAIGs if she chooses to, the overall experience has been one she’s been excited to have.

“It’s a really cool experience to see because I never really knew how many there were,” said Patton. “I know this is a very small portion of them, but seeing them at the dorms and stuff, it’s just puts everything in perspective and they’re all very, very nice here.”