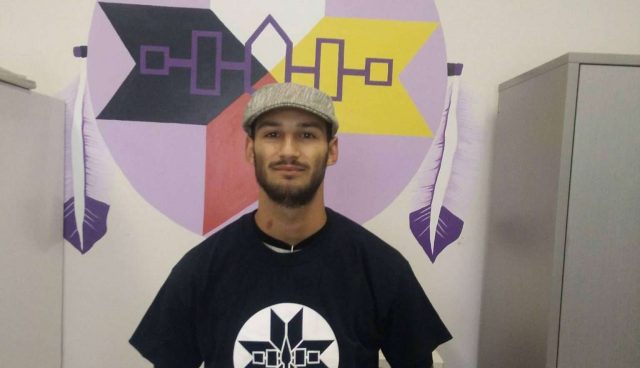 By: Rebecca Chant, The Eastern Door

Devan Peterson, a student at the First Nations Regional Adult Education Centre, is heading to Cameroon, Africa to help build a water tank and exchange knowledge about food sustainability.

The government has been converting Bafut, Cameroon into an eco-village, with a completion goal of the year 2020. An eco-village is when humans and nature are integrated together to reduce harm of the environment and to support healthy human development.

Part of the eco-village plan is a concrete water tank to store potable water. Peterson will be joining the McGill SymBioSyn students who are heading to Bafut to research and apply their sustainability projects for the month of August, in collaboration with the Global Ecovillage Network.

“We’re building a water tower to give them clean drinking water,” Peterson said, “so it can hold so much water at all times.”

During the winter, Joshua Konkankoh from the eco-village development project heard about the food sustainability project at the Adult Education Centre and its goals of reconnecting with the land.

The education centre and the eco-village project developed an agreement to help each other. This opened an opportunity to send someone as a representative from Kahnawake and exchange information about the transferal of cultural values and traditions through the growing of food.

The centre has been developing a hydroponic project over the last two years to help deal with food security issues. The students are learning how to grow food with minimal amounts of water, light and heat, in order to develop a model that can be transposed anywhere, including other communities. Peterson has been part of the project since the beginning.

FNRAEC director Diane Labelle says choosing to sponsor Peterson’s trip was an easy decision. “Devan is such a wonderful young man who represents the values of Mohawk people. When it came to choosing an individual it wasn’t difficult simply by the fact that everybody kind of went ‘yeah, Devan should be the one,’” Labelle said. “We are very confident that he is going to do a wonderful job.”

Peterson is excited to discover Bafut.

“The most excitement I have is for the culture,” he said. “I want to see and understand them as much as possible and relate to them. I am very connected when it comes to that and I would love to see someone else in their style of culture and the way they live and the food. I am excited about all of it, to be honest.”

Bafut, which is in the Northwest of Cameroon in Africa, is one of the few regions in the country that is still ruled by a chief with traditional power structures that works alongside the modern government. The current king (known as “Fon” in Cameroon) is the eleventh king of Bafut.

Peterson has been invited to a ceremony at the palace, where he will present the FNRAEC food sustainability project to the officials. He will have the opportunity to meet the king of Bafut.

A request has been made for community members to contribute gifts that will help make the meeting memorable: items like regalia, a ribbon shirt or dress, local music CDs, necklaces or other items that can be left in Africa.

The community is asked to drop off the items at the Adult Education Centre before Friday at 4 p.m. because Peterson leaves this weekend.

“It’s a great, great learning experience and I’m hoping to expand my mind, my knowledge and my beliefs to a wider range with this trip,” Peterson said.

He is also hoping to learn about the children of Bafut and incorporate his experiences in his future career. He officially graduates from the Early Childhood Education program while he is away.

Labelle says the Adult Education Centre would like to continue this opportunity for students “year after year.” Peterson returns September 1, 2017.

If you look up Bafut in Cameroon, you will find some interesting facts about the king. Most notably, you will read that he has almost 100 wives and 500 children. As part of tradition, each royal successor inherits all of the wives and children of the previous king. King Abumbi II, for example, inherited 72 wives from the 10th king.

The royal palace has about 50 houses surrounding the main building, all part of the royal residence. The palace underwent a conservation project in 2007 after the World Monuments Fund placed it on the list of the 100 most endangered sites.

Many of the roofs had collapsed or started leaking, which affected the structural integrity of the buildings. During repairs, the locals were trained to help repair and maintain the homes.