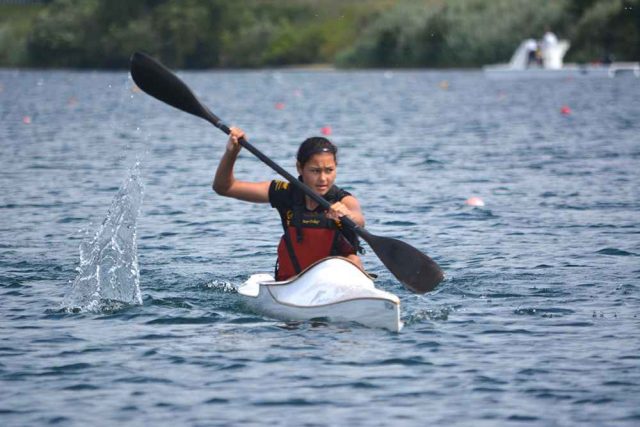 The Onake Paddlers would have a harder time paddling with the weight of their medals if they tried, as the girls and two boys again were a force to be reckoned with on the water. Sylvia White took home five. (Daniel J. Rowe, The Eastern Door)

If there is one team expected to do well at home, and feared by all clubs across the country, it’s the Onake Paddling Club.

In Regina, the Onake paddlers cruised to 30-plus medals, pushing Team EDN up the medal count standings straight off the bat.

At the Welland International Flatwater Centre just outside of St. Catharines, the 2017 edition picked up right where the 2014 team left off, and ripped competition off the water.

Onake’s two boys and eight girls picked up 34 medals in three days of competition last week from Tuesday to Thursday.

“Before the race, I was nervous because I wasn’t sure what I was going to do because I’m U19 now,” said Phillips, who nabbed three silver medals. “After that first race when I got silver, I was a little bit more relaxed, and more confident going on the water.”

Konwana’ké:ren Diabo followed in her sister Konwawennenhawi’s paddle strokes from the Regina games in 2014, and started racking up medals quickly.

“It was awesome,” said Konwana’ké:ren, who won three golds two silver and a bronze medal. “I was getting all nervous at first, thinking that there were all these other teams that were super good. They did a lot better than they did last time, and you can tell that they’re starting to get into it, but we stayed up there, so that was really awesome.”

Day two, the Onake team picked up right where it left off, and won nine medals.

Gracie Diabo and Sylvia White seemed to be one and two in every other race. Diabo spoke about racing the feisty White, who had one gold medal and four silvers.

“It’s fun because she pushes me to be better and keep up,” said Gracie, who won two golds and three silvers and a bronze. “I know she can catch up to me.”

When Danika Zachary crossed the finish line in third in the 6000-metre kayak, it meant that all Onake paddlers had a medal. Zachary wound up with three bronze medals.

With another NAIG paddling event in the books, teams across Turtle Island will need to hit the water often if they want a chance at Kahnawake’s masters of the water.