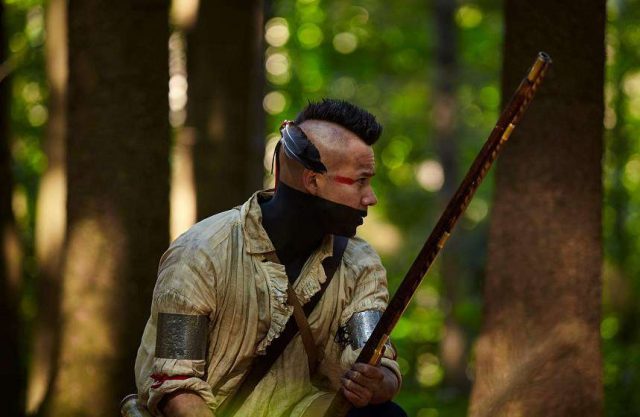 By: Gage Diabo, The Eastern Door

More Mad Max than The Orenda, Mohawk made a gory, crowd-pleasing splash during its world premiere at the Fantasia International Film Festival.

Set during the War of 1812, when the Mohawks of present-day New York remained neutral, the film involves the cat and mouse chase between a small group of Mohawk and a pack of bloodthirsty American soldiers.

While it ventures into some (no pun intended) heated territory, Mohawk is by no means dry or historical.

Indeed, the film is most satisfying when it toys with its audience’s expectations. In terms of genre, it plays mostly like a 70s exploitation film, with hints of spaghetti western, revenge drama, and even (with kudos to director Ted Geoghegan’s background in horror) slasher flicks.

Perhaps the most fitting description of all came from the festival emcee, who introduced the film as “a home-invasion thriller where the ‘home’ is the entire continent of North America.”

Although its limited budget shows from time to time in its shaky camerawork and sketchy period costumes, Mohawk is nothing if not a meticulous and well-researched film.

During a Q&A after the screening, Geoghegan explained that his co-screenwriter Grady Hendrix had a lifelong obsession with the history of the War of 1812 and that his insight accounts for the film’s close attention to historical detail.

The script also incorporates a generous helping of un-subtitled Kanien’kéha dialogue, for which local speakers Akwiratékha Martin and Wentahawi Elijah served as consultants.

As for why those lines remain untranslated for English viewers, the director said that he wanted to let the language “live as its own thing” without the risk of having it dumbed-down or lost in translation.

At the same time, the main drawback is that, for a film with the title Mohawk and with such anti-colonial sympathies, the story is decidedly lacking in Indigenous presence.

Kahnawake’s own Kaniehtiio Horn receives top billing as Oak, the Mohawk warrior who leads the resistance against the American invaders. Yet, except for a particularly awesome climactic fight sequence, neither she nor the other Indigenous characters get very much to do during the film.

Instead, the film makes it obvious that the screenwriters were more enamoured with the non-Native characters. Brought to life with scenery-chewing zest by a colourful cast of character actors, including WWE wrestler Luke Harper, the Americans overwhelm Mohawk to the point where it’s easy to forget there are even Mohawks in the story in the first place.

Still, these political shortcomings don’t diminish the film’s impact as a blood-soaked thrill-ride. Between Goeghegan’s precise direction, Horn’s dramatic intensity, and some great practical gore effects by Marcus Koch and Cat Bernier, the film had Saturday night’s audience gasping, squirming, and cheering at all the right moments.

Mohawk is certainly not the kind of movie that will show up in film school textbooks or essays on First Nations cinema, but it felt right at home as part of Fantasia’s eclectic lineup. Keep an eye out for it as a fun midnight movie, so long as you don’t take it too seriously.