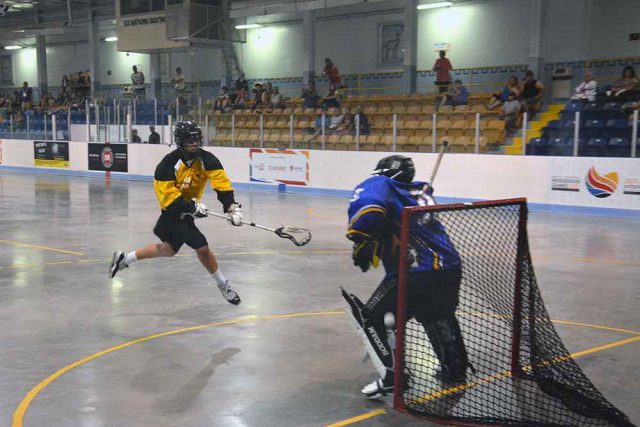 EDN’s U19 lax squad came out a tad sluggish Monday, but found its grove as the week went on. The boys dropped a epic contest in double OT against Haudenosaunee and play for bronze today.  (Daniel J. Rowe, The Eastern Door)

The EDN lacrosse teams were definitely ones to watch in the NAIG as other teams geared up to take down the arguable favourites.

While the U19 boys and girls’ teams found themselves near the top of the pack, a slipped period cost the U16 squad dearly, as it bowed out of the tournament without a medal.

Team EDN will miss its chance to repeat as gold medalists after a heartbreaking, double overtime, three-hour game against Haudenosaunee (New York) in the semis last night.

The older of the two EDN squads started its tournament at the Gaylord Powless Arena, and faced off against an energetic Team BC and its star forward Sekawnee Baker.

After looking like it would take the first game, Baker scored goal after goal in dramatic and highlight reel fashion to push the game to overtime. BC took the extra frame and shocked EDN winning 11-8.

“We could have had the win,” said forward Jake Rice Jr. “It’s a tough game to play without any righties.”

Rice and the EDN squad did not let Monday’s blues seep into Tuesday, and handled Saskatchewan 10-5, and blew out Wisconsin Wednesday 25-4.

“We kind of just outplayed them the whole game,” said defender Cole Kirby. “(They had) barely any shots on our goalie Keron (Dickson).”

The 11-10 loss to New York last night means EDN will have a shot at revenge against BC for bronze.

Fatigue may have been a factor for EDN against New York.

For the first time at the NAIG, the girls took to the box, and competed in U19 lacrosse, and Team EDN is looking to make the historic moment golden.

It was a momentous occasion with a significance that goalie Teiotsatonteh Diabo of Kahnawake did not miss.

“It’s been a great experience for me playing for the U19 girls,” said Diabo. “I made lots of new friends and I’m just very happy and proud to be a part of the first-ever girls lacrosse in the 2017 NAIG games.”

The EDN squad wasted no time making a splash at the tournament, beating Saskatchewan 17-2 in the opening game.

EDN then took down BC the next day, winning 8-5 before wiping the floor with Manitoba winning 18-1.

The team’s final round robin game was a back-and-forth barnburner against Ontario that ended in a 9-7 loss.

“The games are great,” said Diabo. “We give it our all till the very last minute of the game. All the girls from ’sasne are really talented. Today (Wednesday), we went up against Ontario. It was a good back-and-forth game with a lot of good players. We knew going in there it would be a competitive intense game, and that it was.”

The EDN girls bounced back and beat BC 10-4 in the semi finals yesterday and play for the first-ever girls lacrosse gold today.

The EDN U16 boys took the rink Monday morning against a big and motivated BC team that fell behind early to the fast and talented EDN runners.

BC fought back, however, and took the game 12-10 in overtime to draw first blood in the tournament.

“It shows how good our team is and how good we can be, but we just got tired in the end and got lost,” said EDN forward Keldren King. “They played a really hard game and walked off on us. They have a good team.”

EDN found its grove Tuesday and took down a tough Haudenosaunee team (New York) 10-9 before walking all over Alberta winning 18-4.

The EDN boys wound up second in their pool, pitting them against Ontario in the semi final.

After one, the game was tied at threes, and after the second, fives. In the final period, however, Ontario took advantage of power plays and pulled away winning 11-6.

The loss set up a bronze-medal match for the U16s against Team Haudenosaunee from New York.

This time, it was the purple-clad Haudenosaunee boys who would have the last laugh.

Haudenosaunee scored three quick goals in the second period to pull to a 6-2 lead before EDN got two back unanswered to make it 6-4.

Xavier Taylor then scored his second of the game, diving through the crease to make it 9-6.

Treyton Mitchell got one back for EDN (his fourth) on the power play as the teams’ goal exchange continued.

The scoring stopped there, however, and Team Haudenosaunee held on for the bronze medal.