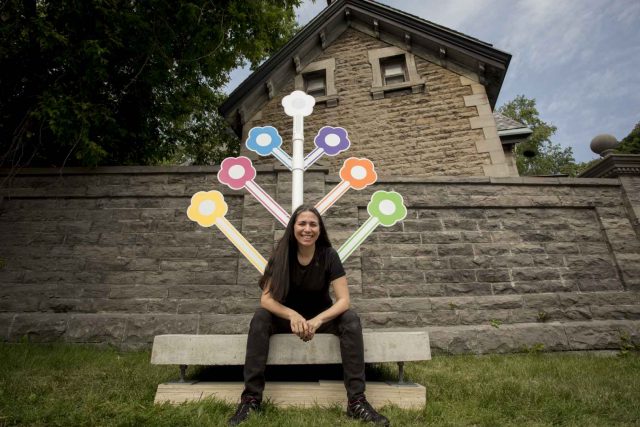 Skawennati Fragnito’s Celestial Tree blooms by the corner of Pine Avenue and McTavish, as a part of the Path to Resilience exhibition on Montreal’s new Promenade Fleuve-Montagne. (Courtesy Sébastien Roy)

As one of the largest projects celebrating the city’s 375th anniversary, the promenade links Mount Royal to the St. Lawrence River at the Old Port with larger pedestrian crosswalks and signage to highlight the city’s history, landscapes and heritage.

“The city does a great job with not acknowledging that we’re all occupying Mohawk territory, and this has to be reiterated. This is one way to address it in a way where we don’t need to hit anyone over the head, but we do need to make space,” said Cheryl Sim, curator of Path of Resilience.

The temporary exhibition is the only part of the anniversary project to include Indigenous perspectives on three locations steeped in history along the new 3.8 km urban walkway.

“Montreal is really about erasure. We can hope and dream, but this city is a long way from truly knowing where they are – that they’re on Indigenous land,” said Kanien’kehá:ka artist Skawennati Fragnito, who is one of the three artists a part of the exhibition.

“I think it’s fine that people want to celebrate. Everybody loves a party and it’s great to celebrate your survival and things that you hold dear, but I just want the 375th to recognize there would not be that number if it wasn’t for the people who were here before to help them survive.”

As a new media artist, she creates machinimas, or digital movies, that address history and raise questions about authenticity and tradition, while imagining representations of Indigenous people in the future.

Her eight-foot tall sculpture, The Celestial Tree, is located at the foot of the mountain by the corner of Pine Avenue and McTavish.

“The tree comes directly from the last machinima, which is called She Falls For Ages. It’s a sci-fi retelling of the Iroquois creation story. In this machinima of the celestial tree, we have created a society that’s based around the tree,” she said.

While Skawennati’s work imagines Indigenous presence in the future, Nadia Myre’s histoire revenue focuses on a difficult and controversial part of Montreal’s past and Maria Hupfield’s KA-POW! summons visitors into being in the now.

KA-POW! consists of two bespoke benches surrounding trees behind Square-Victoria metro – an area since 1866 that has been one where people could gather, and it is still frequented by office workers, tourists and residents.

“It’s an interesting space because people don’t go under those trees usually. They sit on the edges of those raised tree beds and don’t occupy that area,” said Sim. “That area has always been a meeting place, but it’s not fully exploited.”

Myre, an Algonquin member of Kitigan Zibi, represents the story of Marie-Joseph Angelique in her audio-visual installation in a Garden at the foot of St. Patrick’s Basilica.

Angelique, an enslaved black woman, was charged with setting fire to her mistress’ home in 1734, which burned down a major part of Montreal’s merchant’s quarter on rue St-Paul. She was tortured, convicted and hanged for arson on June 21 of that same year.

“I thought it was interesting because we don’t hear very much about her and we don’t really think of Montreal or Canada as a place where slavery existed, and most of the slaves were actually Indigenous and not of African decent,” she said.

Path of Resilience is on exhibition until November 30.