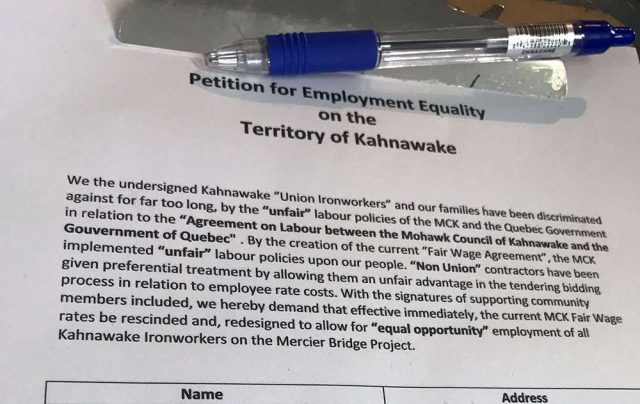 The question for those signing on to a circling petition is whether to continue using Fair Wage Agreements or move to a system where union workers get priority on large-scale construction sites such as the upcoming replacement of the provincial half of the Mercier Bridge. (Daniel J. Rowe, The Eastern Door)

To bring up the Fair Wage Agreement (FWA) is to wade into a controversial and contentious conversation, depending on whom you speak to in Kahnawake.

It’s a series of agreements (updated annually) forged between the Mohawk Council of Kahnawake and its labour office (KLO), and contractors engaged in large-scale projects such as the Mercier Bridge.

A petition drafted by four local union ironworkers, circling the community, takes aim at the FWA and the Kahnawake–Quebec agreement on labour signed in 2014 and enacted in Quebec’s national assembly the same year.

The petition (seen above) reads that the labour policies in Kahnawake are “unfair” and that union ironworkers have been “discriminated against” by the creation of the FWA and the labour agreement.

“Non union contractors have been given preferential treatment by allowing them an unfair advantage in the tendering bidding process in relation to employee rate costs,” the petition reads.

“We’re attempting to have the union man become recognized again as we were, and as strong as they are, once again on the reserve,” said Brian Goodleaf, who’s pushing the petition.

The petition demands the Fair Wage rates be rescinded and redesigned to allow “equal opportunity employment of all Kahnawake Ironworkers on the Mercier Bridge.”

Council chief Rhonda Kirby does not feel ironworkers have been discriminated against in Kahnawake, as the Quebec-Kahnawake agreement allows for workers to choose whether they pay into a union or not.

“Everybody always had the option of paying into the union or not,” said Kirby. “We tried a lot of different things over the years to try to help them (union workers).”

The argument from those who signed the petition is that although workers can choose to be union or not, contractors are not obliged to hire one or the other.

The choice, for those involved with the petition, is not a fair one, as contractors would need to pay a higher wage for union workers.

“By using your choice, as the agreement says, you’re effectively talking yourself out of a job,” said Goodleaf. “Tell me the fairness in that.”

In Quebec, contractors pay into a number of funds and organizations that may have no benefit to them in Kahnawake, in addition to paying taxes they should not, according to KLO director Mike O’Brien.

O’Brien, who does not support the petition, said local contractors should be careful not to confuse the Quebec regime as standing for union.

“The contractor perspective, under that Quebec regime, and I won’t call it the union regime, that contractor is paying into two different associations of which he’ll never gain benefit from because he doesn’t belong to them,” said O’Brien.

The petition, for O’Brien, over-simplifies the argument to be: union or fair wage, when the reality is more complex.

“Yes, they want to hire all union men, but it’s the Quebec regime that’s ripping them off and they’re blaming it on the fair wage,” he said. “The difference between the two regimes can be shrunk if the right deductions are taken out for the contractor, not all the deductions that are there. Not all the costs to the contractor.”

Mohawk Bridge Consortium owners had no comment on the petition. The company pays workers based on the FWA, which is comparable and built off the CBA (collective bargaining agreement). Some sub-contractors hired union workers for specialized work on the bridge.

Kirby agrees that there is room for improvement in the FWA, but doesn’t think it should be scrapped.

“It ensures that the employee is going to be paid the salary that he’s entitled to. If there wasn’t one, people could pay $10 an hour,” she said.

“If you’re going anywhere else, you’re going to get the correct wages, so how come when you’re here people don’t think you should be paid what you’re really entitled to?”

Part of the issue for those supporting the petition is assumptions that community members may make in relation to union workers being able to set up a shop in Kahnawake.

“Everybody in this community, and I’ll even go as far as to say even the unborn, would know or does know that the union being in Kahnawake, or workers being able to work through the union in Kahnawake, will not bring in taxes,” said Louis Stacey, a retired union ironworker. “That is an outright lie.”

Stacey is frustrated that some will not consider the situation in all its complexities.

“People in Kahnawake will listen to whoever has the loudest mouth, whether they are telling you the truth or not,” said Stacey.

Local 711 Union being one such organization.

Agreements aside, Stacey, who also works at the labour office, wants the union to have a place in the community.

“I don’t want to say the union’s coming in,” he said. “The workers who want to work under union conditions, and when it comes to ironwork, yes, it’s 711, but 711 business agents aren’t going to open up an office here and say, ‘hey. You’re listening to us.’ It don’t work that way.

“Anyone who’s ever been a union ironworker, if they ever went to at least one union meeting, they would understand how the union works, and where the workers on the job have x amount of leeway, where the delegates come in to play and the worker representatives, who we call a shop steward.”

The shop steward in the community would be a Kahnawa’kehró:non, according to Stacey, and would be the liaison between the workers and the main union office.

“For example, the big job in Beauharnois, there were a lot of guys from town, and a lot not from town, and the shop steward was from Kahnawake,” said ironworker Vance Goodleaf. “He’s the liaison between the hall.”

Stacey explained that Ironworkers International was organized in 1896, and Kahnawake’s workers made their names in the trade starting from the Quebec Bridge construction and continued through the entire 20th century.

He is frustrated that Mohawk ironworkers are famous and respected across the globe, but seemingly do not have a place in the community.

“Hundreds of our people have become famous in written material, movies, documentaries, but right here at home, we’re rejecting what made us famous: union ironwork,” said Stacey. “It just doesn’t make sense.”