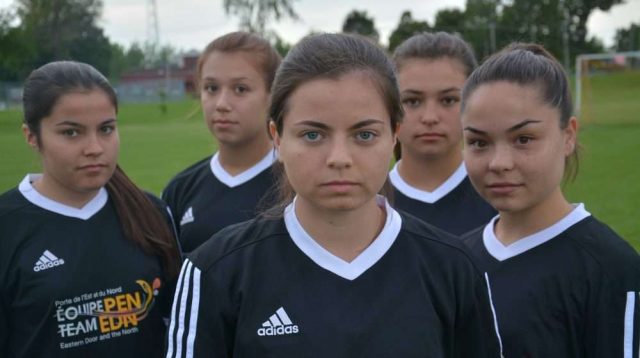 The Eastern Door and the North (EDN) team is ready to take on the North American Indigenous Games (NAIG) today, as per normal, chocked full of Kahnawake’s talented athletes across the spectrum of sports at the tournament. The U19 soccer team featuring Melody Horn, Journey Jacobs, Lylee Horn, Amanda Cross and Karihwenhawi Kirby head onto the pitch tonight. (Photos by Daniel J. Rowe, Peter Phillips, Karonhiio Curotte; The Eastern Door).

Team Eastern Door and the North (EDN) is in Toronto for 2017’s North American Indigenous Games (NAIG) that had its opening ceremonies last night. View the full schedule here.

EDN features athletes from throughout the Onkwehón:we communities in Quebec including a huge number of talented teenagers from Kahnawake, Kanesatake and Akwesasne. Karonhiio Curotte is once again manning the helm of Team Kahnawake’s archery squad that grew from the tournament in 2014 and looks to take the 3-D course at the Hamilton Angling and Hunting Association.

Events start at 9 a.m. Tuesday for the U19 and U16 Males and 10:30 for the females in both the instinctive and compound bow.

In the U16 female division Karonhianoron Curotte will wield her compound bow, while Angelina Montour will show her skill with the traditional. Sakoianohawi Curotte will shoot the compound for the U16 males, while Tahothoratie Cross will do the same in the U19s. Kiana Harper and Tehotsenhathe Lazare will be the U19 traditional division.

Team EDN has two female teams competing this week at the NAIG.

Today at 2:30 p.m. the U16 EDN girls hit the floor against Saskatchewan and features local girls Watewennenhawihtha Goodleaf, Iewenniohstha Montour and Rome Cross, who played for the AA Chateauguay Ravens this season.

The U19 girls feature Trafalgar standout Sabrina Diabo, and EDN plays BC tonight at 5:30. The paddlers have big aqua socks to fill this week, as last game’s paddlers came home with a boatload of medals. The girls and boys at Onake are ready to hit the water though, and come close to the 30-plus medals from last games.

“It’s very intimidating because I feel I need to win just as many,” said paddler Gracie Diabo.

The 10 paddlers raced a regatta on the weekend, and come in ready.

“We’re pretty prepared, and we have a lot of practices,” said Diabo.

Coach Maris Jacobs won the EDN’s first medal of the 2014 games, and likes the determination she sees in this year’s team.

She recalled last year’s excitement at her team’s performance, and the amount of medals the team won early.

“Last time was my first games and also my last because I’m too old now,” said Jacobs, who won six medals in six races. “We were excited because when the medal count came out, Team EDN was way at the top because of the canoe team.”

The EDN girls U16 and U19 volleyball teams look to improve on the impressive showing from 2014.

The U19s won silver, and U16s flew out of the gates before being halted in the playoffs.

Mandie Diabo and Iaonhátie Deom join the team made up mostly of girls from Akwesasne and a number from Cree communities on the U19 team.

Diabo played on the EDN U16 team in 2014, and said the team looks good thus far.

“There’s a handful from 2014 that were on the U16 team with me from Akwesasne that are back again, and they’ve all improved and strengthened their skills since 2014,” she said.

“Now it’s just to see how we’re all going to mesh with the girls from up north, but I think it’ll work out well.”

Taierahkwenhawi Montour from Kahnawake is on the U16 team. Kahnawake will feature prominently in both the U16 and U19 lacrosse teams that start playing at the Iroquois Lacrosse, Gaylord Powless and Harry Howell Arenas today, and for the first time feature a U19 girls squad.

Ryan Jacobs is coaching the U16 team, and knows the EDN squad will be one to reckon with.

“We have a team of good experienced players,” he said. “They will have a great time experiencing NAIG and competing in games.”

For the first time in NAIG history, the girls will step into the box, and Team EDN will be there. EDN starts with Teiotsatonteh Diabo in goalie, a local girl who has played in Kahnawake’s system since she was Paperweight.

The team is in action today against Saskatchewan early. Kahnawake’s NAIG rifle team is also getting ready for the tournament, many for the first time. Their final practice finished up Thursday evening before setting their sites on Toronto.

Shakowennenhawi Deer is this year’s coach and it is his first time guiding the youth through such a journey.

It’s his responsibility to teach them all the basics, including cleaning the weapon, alignment and proper safety.

“We’ve been practicing since August of last year for the tryouts, then we made the team in December. We started team practices only around the end of May because the weather wasn’t cooperative with us,” coach Deer said.

Joanne Lazare will be competing at NAIG for her first time and she is part of the U16 rifle team, though she is not nervous at all. She was drawn to sport shooting because of her interest in hunting, though she says her parents don’t trust her enough so right now this is the next best thing.

The teams will be faced with three days of competition. The first two days are referred to as 3-p where they fire from standing, leaning and prone. They’ll empty a total of 20 rounds from each position, which adds up to 60 rounds per day.

The final day is shooting from the prone position where they’ll empty another 20 rounds each. The EDN soccer squads from 2014 were two of the most talented squads in the tournament, to say the least. This week, a crop of new talented up-and-comers makes up the U16 roster coached by last tournament’s U19 bosses: Harry Rice and Teken Diabo.

The U19s include 2014 breakout sensation Lylee Horn, her sister Melody and a swath of talented footballers from keeper Cedar Lazare through the defence and midfield and into the front line of attack.

Four golfers are in Toronto, and getting set to tee off tomorrow for round one of the three-day event.

“I want them to do the best that they can,” said coach James Lazare. “Two of them going, it’s their first games for them. My goal is to get their fundamentals down, make sure they’re confident with themselves and how to handle their nerves on the first tee.”

The boys tee off at the Humber Valley Golf Course for round one tomorrow.

“It’s a relatively short course,” said Lazare. “It should be a good challenge, but they should overcome it… Coaching them overall, they have a good attitude, they work hard, and they want to improve and do the best that they can when they’re there.” In 2014, Team EDN shot up to the top of the medal count after the paddlers ripped competition apart on the water. The team, however, moved down the table after track and swimming events began as EDN had no team competing in either.

“I’ve never been part of the Indigenous Games, I only went for the hockey tournaments, so this will be a good experience,” said Dylan Stacey, who will run the 100M, 200M, 400M, two relays and compete in long jump.

Anna Zachary is another newbie to the games, and the multi-sport athlete, who has competed in multiple sports in multiple venues, has some jitters about her first tour of the NAIG. Zachary will run in four track events as well as compete in shot put and javelin.

“I’m nervous about competing,” she said. “I’m afraid everyone is going to have more experience, but I’m excited about being there. All of my other friends were talking about how fun it is.” Team EDN wants one trophy back in its cabinet.

The Todd Diabo trophy for top team went to Saskatchewan last tournament after EDN failed by the slimmest margin to compile the most points.

Nic Styres was on that team and won a bronze medal. Styres’ last match was against Canadian Junior wrestler Riel Parisien from Saskatchewan, who lost just two points all tournament.

Those two points were to Styres, who will lead his team at the Toronto Track and Field Centre starting Tuesday.

“I’m telling them to expect a lot of competition,” said Styres. “You’re going to see a lot of different people and you’re not going to know what to expect.

“You may think your community or your people are better, but there are people out there who train twice as hard as we do, and I expect a guy like that (Parisien) to wrestle.”

Losing out by one medal for the top trophy is something all wrestlers from Kahnawake will have in their minds as they hit the mats next week.

“It makes me upset but it’s my motivation for this year’s NAIG to get a gold,” said Styres.